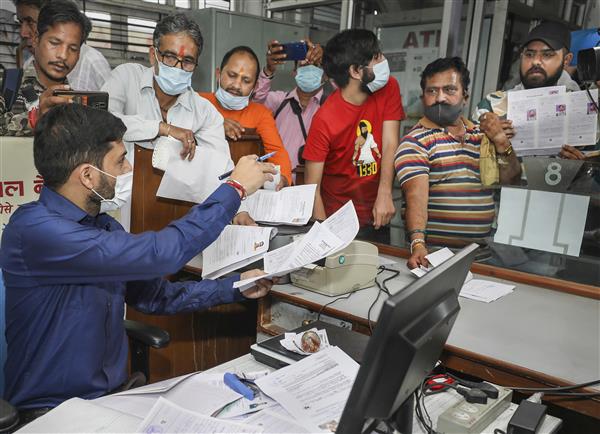 Devotees register for the Amarnath Yatra in Jammu on Monday. PTI

As the registration for Amarnath Yatra commenced today, the Union Ministry of Home Affairs (MHA) has asked the Jammu and Kashmir Police and the Central security agencies to put in place a foolproof security plan for the entire route, as it has approved deployment of over 40,000 personnel of the Central Reserve Police Force (CRPF) and other central forces.

For the yatra, which is set to begin on June 30, the MHA has directed the deployment of more than 40 CRPF personnel and also troopers from other Central Armed Police Forces, sources said.

They said during the yatra, all registered pilgrims would be given a radio-frequency identification tag, which will help to provide the exact location of the person at all times.

As the yatra is going to be resumed after two years, the sources said they expected a large footfall as the pandemic was currently on a decline. Lodging facility for the devotees has also been increased.

Union Home Minister Amit Shah is likely to review the preparation of the Amarnath Yatra during a high-level meeting before the commencement of the pilgrimage, the sources added.

New Delhi: A high-level meeting to cater to the arrangement of Amarnath Yatra was conducted at Srinagar, where it was announced that all pilgrims would be issued radio frequency identification (RFID) cards to track their movement. Apurva Chandra, Secretary, Ministry of Information and Broadcasting, and Arun Kumar Mehta, J&K Chief Secretary, were present at the meeting. TNS