Police sources say heavy firing, including the use of rocket launchers by the army against the terrorists hiding inside the Bhatta Durrian forest, triggered the fire 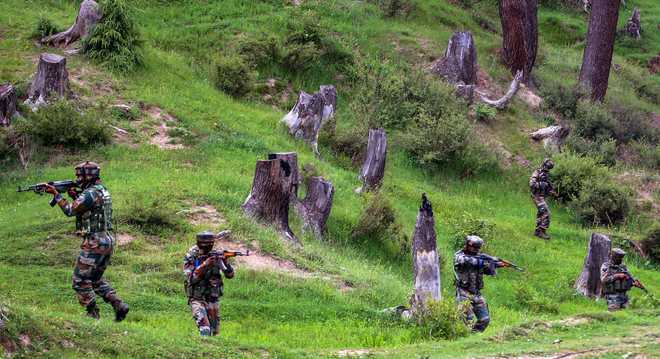 Fire erupted in parts of the Bhatta Durrian forest in Jammu and Kashmir's Poonch on Saturday as the anti-terror operation in the district continued for the 19th day.

Police sources said heavy firing, including the use of rocket launchers by the army against the terrorists hiding inside the Bhatta Durrian forest, triggered the fire.

Reports said smoke was billowing at some places of the forest which are believed to be the areas where the terrorists are hiding.

There has, however, been no exchange of fire between the security forces and the terrorists in the last three days.

Defence sources said it is possible that the hiding terrorists are either dead or injured, but things would become clear only once the operation is completed.

They added that terrorists, most of them Pakistanis, appear to have infiltrated into the Indian side of the Line of Control (LoC) possibly one or two months back.

"Since then, the group of terrorists, whose number is likely to be around five to seven, have been hiding inside the Bhatta Durrian forest."

So far, half a dozen civilians belonging to villages around the forest have been detained for questioning.

The operation began on October 11 and is one of the longest anti-terror operations in Jammu and Kashmir since armed violence started in the early 1990s.

Nine soldiers, including two junior commissioned officers, have been killed and two policemen and a soldier injured in the ongoing operation. IANS