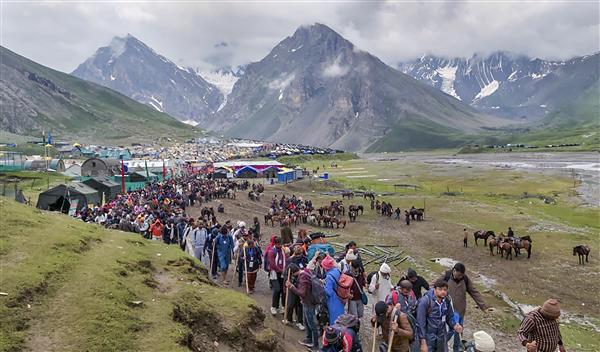 With only 11 days remaining in the conclusion of the Amarnath pilgrimage, the estimates of government that nearly 6-8 lakh pilgrims will visit the cave shrine this year are falling apart.

The number of pilgrims visiting the shrine has not even touched the 3-lakh mark so far.

One of the major reasons of dampened spirits of pilgrims this year are flash floods and frequent closure of the Jammu-Srinagar National Highway due to landslides.

In April, when the government was preparing for the pilgrimage after a gap of two years, Secretary to the Union Ministry of Information and Broadcasting, Apurva Chandra, in a press conference in Srinagar, had said that 6-8 lakh pilgrims were expected to the Amarnath shrine this year. The yatra did not take place in 2020 and 2021 due to Covid-19 outbreak and even in 2019, it was called off mid-way as the government abrogated the special status of J&K on August 5.

Even today, only 700 pilgrims left for the cave shrine from Bhagwati Nagar in Jammu. As per an official of Shri Amarnathji Shrine Board (SASB), nearly 2.80 lakh pilgrims have paid their obeisance at the shrine so far.

Flash flood near the cave on July 8, in which 16 persons died and many were injured, became a major deterrent for the pilgrims. Yatra was again suspended recently, when another flash flood was reported near the cave shrine. However, there was no casualty this time. In 2019 by August 1, the yatra had crossed the 3.42 lakh figure. It was suspended thereafter. The pilgrimage touched only 2.85 lakh figure in 2018 and 2.60 lakh in 2017.

Shooting stones and landslides on the national highway in Ramban halted the pilgrimage almost every week in July. The monsoon has brought continuous rains in the mountainous regions of Jammu and Kashmir. Many hilly areas have witnessed flash floods and destruction of property due to incessant rains. The government had built a Yatri Niwas at Chanderkote in Ramban that became the shelter for pilgrims whenever the highway was blocked.