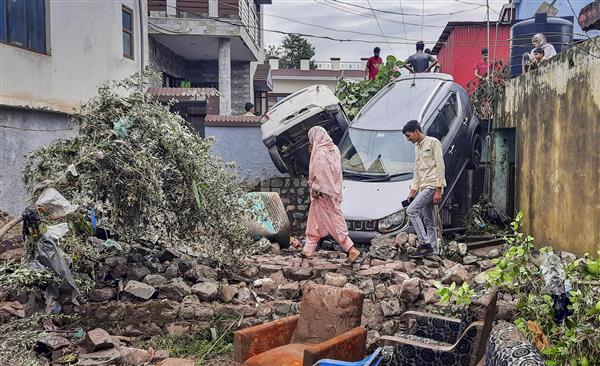 The flash floods struck Surankote town of Poonch district with such intensity that several cars were displaced and tilted sideways. PTI

Meanwhile, flash floods triggered by rains in Surankote town of Poonch district in Jammu division caused damage to property worth crores in residential and market areas.

The flash floods struck the town around 8.30 pm on Sunday with such intensity that several cars were displaced from their parking place and tilted sideways. The water that entered the ground floor of the homes was as deep as 8 feet in some areas, as per officials. Residents had to vacate the ground floor and rush to the first floor to save their lives.

The Army, police and the district administration officials rushed to the spot and started evacuating people who were stuck inside their homes. Gadgets and other valuables that were kept in the ground floor of the houses were damaged. Iqbal Nagar and Potha by-pass reported the maximum damage.

Poonch ADC Basharat Hussain said the massive flash flood was triggered due to incessant rain in the area on Sunday. “There were houses where water was as deep as 8 feet. In some other areas, it was 2-3-feet deep. Almost every house in Surankote was flooded, due to which property worth crores has been damaged even as assessment of losses is going on,” Hussain said.

“Houses have been filled with muck and water due to which pumping equipment has been deployed. While water from a majority of homes was cleared by Monday evening, mud still remains and that will be cleared in the coming days,” Hussain said. He said electricity and drinking water has been restored in a majority of the areas.

All schools in the area have been shut till further orders.

Locals said the flood water entered the houses because many waterways have been encroached upon by people. Hussain said the administration had identified five such locations, from where water diverted to the residential areas and the encroachments will be removed. The Jal Shakti Department, fire brigade and municipality worked throughout the day to flush the flood water from homes.

Surankote Beopar Mandal president Azhar Manhas said that over 150 shops and houses have been damaged in the area.

Manhas said the business community had demanded that the district administration constitute teams to compensate the damages immediately.

“Besides, we also want that drinking water be restored in the entire area as soon as possible and encroachments from waterways be removed,” Manhas said.

There were houses where water was as deep as 8 feet. In some other areas, it was 2-3-feet deep. Almost every house in Surankote was flooded, due to which property worth crores has been damaged even as the assessment of losses is going on. — Basharat Hussain, ADC, Poonch