For first time, BRO to open Zojila for traffic in March 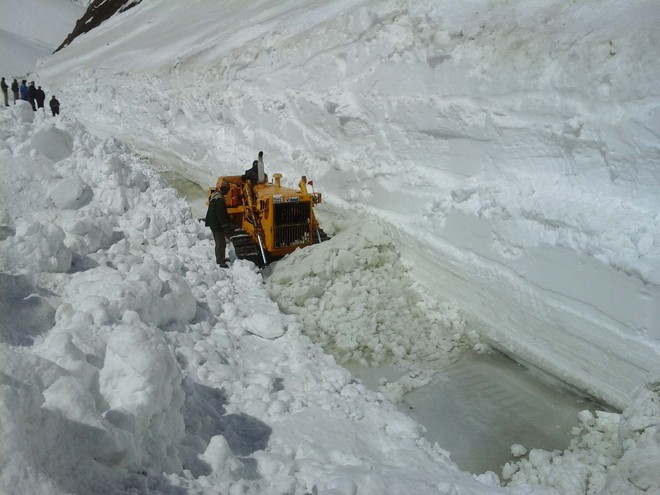 Snow-clearance work in progress at the Zojila. File photo

For the first time, the Zojila — a lynchpin of all-weather connectivity to Ladakh — at an altitude of 11,649 ft is all set to be thrown open for traffic in the next few days as the Beacon has cleared the snow-bound road much ahead of the scheduled time.

The only arterial road, Srinagar-Leh highway, which connects Leh with rest of the country, was closed in early December last year as heavy snowfall had shut the road for all types of transport.

Our men by using 12 modern equipment of snow clearance cleared the highway till the Zojila in just 18 days, which is a record-breaking achievement in the last 60 years as the road will be thrown open in March. Colonel Mukesh Kumar, commander, 32 border roads task forces

“This year snowfall has broken all past records of last one decade. The snow clearance operations were undertaken by the Project Beacon of the BRO from Gagangir to zero point and the same was done by the Project Vijayak from Drass towards zero point,” Colonel Mukesh Kumar, Commander, 32 Border Roads Task Forces (BRTF), told The Tribune.

The BRTF Commander, who is the overall incharge of snow clearance operation, said the clearance work from Gaganger village was started much earlier this year on February 21 to connect Ladakh with rest of the country as early as possible.

“Our men by using 12 modern equipment of snow clearance cleared the highway till the Zojila in just 18 days, which is a record-breaking achievement in the last 60 years as the road will be thrown open in March,” the Commander said.

He said till last year the snow clearance operation would begin in March and the road would be opened in April.

“This year we are much ahead than previous years and it is record of sorts in spite of the fact that there is unprecedented snow accumulation in the Himalayan region with snow touching to 10 feet to 50 feet,” he said.

Capt Shubham Sood of 122 RCC, who was leading the snow clearance operations on ground, said the Beacon teams had to face many difficulties during the clearance because the pass was avalanche-prone and avalanches were as high as 65 feet.

“Opening the road in March is a very big achievement for us as we did it in a short duration of 18 days in sub-zero temperature and braving avalanche-prone areas,” he said.