Four washed away in flash floods in Jammu : The Tribune India

Four washed away in flash floods in Jammu

Jammu-Srinagar highway blocked | People asked to stay away from waterbodies 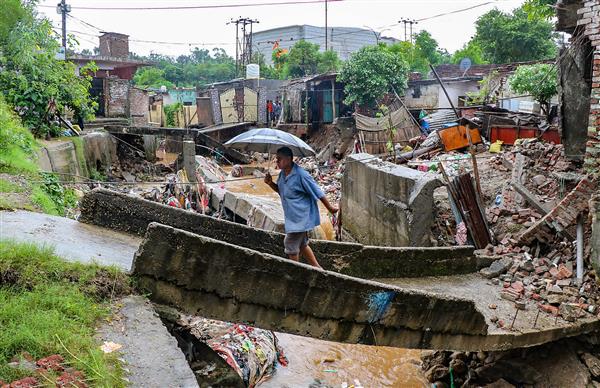 The damaged houses and a bridge following heavy rain in Kalika Colony, Jammu, on Thursday. PTI

Four persons were washed away by flash floods in Jammu division on Thursday. The rain that began late on Wednesday evening continued on Thursday, triggering landslides and shooting stones in Ramban, resulting in the blockage of the Jammu-Srinagar National Highway-44 throughout the day.

Personnel from the State Disaster Response Force (SDRF), the police and the Army were pressed into service for relief and rescue operations in different districts.

Flash floods hit most of the rivers, including Tawi and Chenab, which inundated low-lying areas and damaged infrastructure. Hundreds of houses in several colonies were inundated and traffic came to a halt due to water-logging, prompting the district administration to sound a flood alert.

Deputy Commissioner Ramban Mussarat Islam said two women were feared drowned near Neera, Ramban. “They have been identified as Shamina Begum and her daughter Razia Bano,” he said. A rescue operation was launched to trace them. Other persons stuck amid rain were shifted to safer places.

In another incident in Samba, a student of the Central University of Jammu, identified as Rishit Mitra (hailing from West Bengal), was washed away in Badhori Nullah when he tried to cross it on his bike. Locals engaged in the rescue operation said bystanders had warned the youth against crossing the waterbody, but he ignored. His bike was found at some distance in the nullah, but he couldn’t be traced till this report was filed.

Another woman, identified as Neeru, was also washed away in flash flood in Samba.

Meanwhile, the highway was blocked at Mehar and Cafeteria Morh in Ramban due to major landslides. According to the DC, the restoration work will start once the rain stops.

The Ramban administration has advised the people to stay indoors and avoid going near rivers and nullahs.

Ramban SSP Mohita Sharma said cars and bikes were washed away in Mehar area. “People are advised not to venture out in the open. Cops, SDRF men and quick reaction teams are on the spot for rescue and relief operation,” she added. Union Minister Jitendra Singh said in a Tweet that the search had been going on for the missing persons.

Even in Jammu city, some roads witnessed landslides. The power supply in many areas has been disrupted.

A woman and her daughter feared drowned near Neera in Ramban. Another woman gets washed away in flash flood in Samba. No trace of a pupil from Bengal washed away in Badhori Nullah in Samba. The administration has been making efforts to trace them. Power supply has been disrupted in many areas.