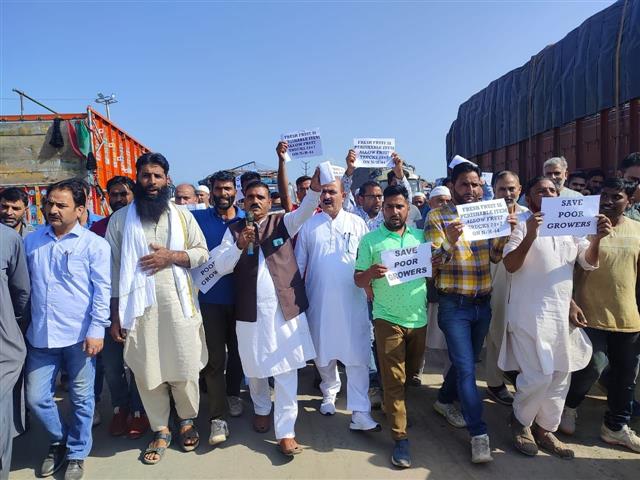 Traders during a protest in Sopore on Wednesday. Tribune photo

Fruit growers on Wednesday started Kashmir-wide protests, claiming that 90% of the apple-laden trucks were stranded due to the closure of the Jammu-Srinagar highway. Nearly 1,500 trucks, mostly from Sopore, move towards Qazigund in south Kashmir before crossing the Banihal tunnel everyday. “Only 200 trucks are allowed to cross the tunnel and the remaining are stranded at Qazigund. Scores of trucks are stranded since September 9,” said Fayaz Ahmad Malik, president of the Fruit Mandi, Sopore.

Kashmir’s Rs 8,000-crore apple industry faced a major crisis after lockdown in the Valley for a few months in 2019 after the suspension of Article 370 and later due to Covid.

Apple trader Ghulam Hassan Rather of Baramulla questioned, “If traffic from Jammu can reach Srinagar normally, why are trucks from Kashmir stopped?” He urged the administration to allow smooth passage of trucks on the highway.

The protesters said trucks should be allowed to move from 11 am to 4 am. Earlier, trucks were stopped on the highway during the Shri Amarnath Yatra.

A delegation of fruit traders and officials, led by Horticulture Director, is on way to Qazigund to take stock of the situation and look into the reason behind the issue.