Give citizenship, or let us leave: Pakistani women in Kashmir 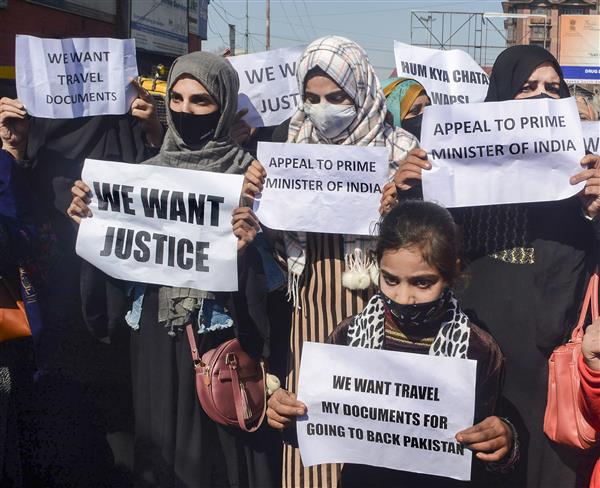 Pakistani women during a protest in Srinagar on Monday. PTI

Stuck in Kashmir for over a decade, Pakistani women held a protest on Monday, saying they should be either granted citizenship or allowed to return to their country. Holding placards reading ‘we want justice’, the women assembled at the Lal Chowk city centre to press the J&K administration for their return to Pakistan.

“The Indian government brought us here and then disowned. If they can’t grant us citizenship, please allow us to return home,” said Saira Javaid. In 2004, the 43-year-old from Karachi married a Kashmiri, Javaid Ahmad Dar of Kupwara’s Lolab, in Pakistan.

Like Javaid, over 350 Pakistani women along with their children are stuck in Kashmir since 2010.

Several Kashmiri men who had gone to Pakistan for arms training against India and eventually gave up arms and returned to Kashmir under New Delhi’s “muddled” rehabilitation policy. These women have been “denied” travel and citizenship documents.

“If we are illegal here, why isn’t the government following a legal process so that we serve the sentence and leave this hellhole?” said Saba Fayaz, another protester.

The government has not granted them identity or residence proof, rendering their children ineligible for admission in schools and jobs.

Human rights activists say these women have been rendered stateless.

In 2010, New Delhi, as a confidence-building measure, proposed a militant rehabilitation policy and projected it as granting amnesty to Kashmiri youth who “had crossed over to Pakistan for arms training but have given up insurgent activities and willing to return to the state.”

The policy appealed to all men, who had gone to Pakistan between January 1989 and December 2009, to return.