Alleges ‘Gupkar gang’ has become ‘gumrahi gang’ which is trying to create fear, confusion among people 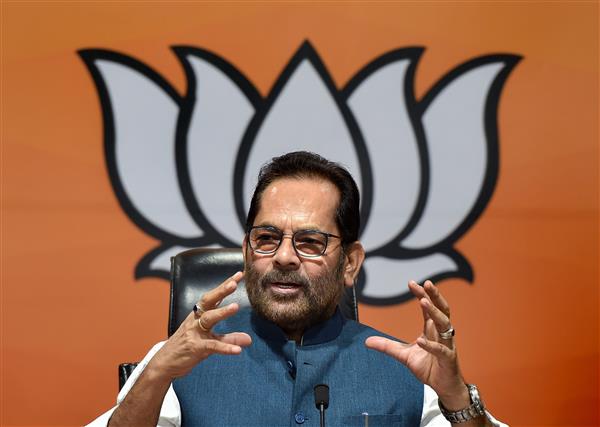 Continuing with the BJP’s attack against the PAGD ahead of the DDC polls, senior party leader and Union Minister Mukhtar Abbas Naqvi on Thursday called the “Gupkar declaration” a “dying declaration” for “dynastic and destructive politics” of the Congress and alliance in Jammu & Kashmir, insisting that that “Congress is a part of Gupkar Alliance for local bodies’ polls in the UT”.

Addressing election meetings at Kupwara, Naqvi alleged the “Gupkar gang” has become ‘gumrahi gang’ (deceiving gang) which is trying to create fear and confusion among the people just for their narrow minded political interests”. The senior minister said the Congress and “dynasty” is supporting those “who want to throw Kashmir back into quagmire of separatism and terrorism. The Congress is supporting anti-national activities of Gupkar gang”.

“Dynastic and feudal arrogance of people involved in loot of public money sent for development of Jammu-Kashmir and Leh-Ladakh has been shattered. After several decades, the BJP has made the people of Jammu-Kashmir an equal partner of democratic process and inclusive development. After abolition of the Article 370, rights of the people of Jammu-Kashmir and Leh-Kargil regarding trade, agriculture, employment, culture, land and property, etc., have been provided absolute Constitutional protection and safe-guard,” he said, according to a statement issued by his office.

Naqvi claimed that “Congress is a part of Gupkar Alliance for local bodies’ polls in Jammu-Kashmir”. “The Congress should make its stand clear on 370,” he said, adding that “Article 370 had given only separatism and terrorism to Jammu-Kashmir and nothing else during the last seven decades”.

“The Central government has initiated several administrative, land and reservation reforms. 164 laws of Jammu-Kashmir have been scrapped and 138 laws have been amended, 890 laws of the Central Government have been implemented.  Amendment in reservation in government jobs has ensured that the maximum people are getting benefits.

“People of Jammu-Kashmir and Leh-Ladakh are also getting benefits of various welfare schemes of the Central Government such as “Mudra Yojna”, “Ujjwala Yojna”, scholarships schemes, “Jan Dhan Yojana”, “Ayushman Bharat”, various skill development programmes, various schemes related to agriculture and horticulture and other employment oriented schemes. Steps have been taken to make Jammu-Kashmir and Leh-Ladakh an investment hub. Global Investment Summit has generated an investment worth about Rs 14,000 crore,” he added.