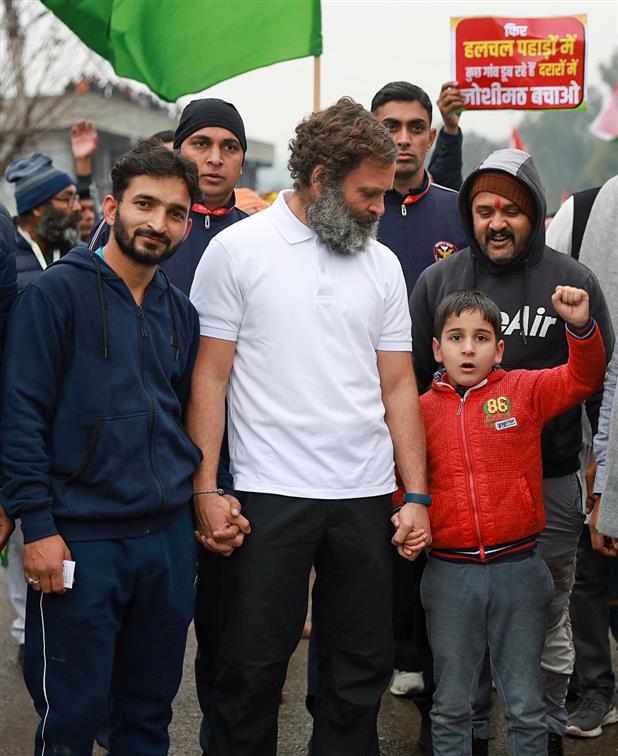 Rahul Gandhi with his supporters in Udhampur on Tuesday. ANI

Inclement weather and landslides on the Jammu-Srinagar National Highway in Ramban district forced Rahul Gandhi to tweak his programme related to Bharat Jodo Yatra. He will reach Kashmir via air and then return to Banihal of Jammu region from where the march will resume on January 27.

Party sources informed that Rahul Gandhi will fly to Delhi from where he will reach Srinagar in a plane and then to Banihal in Jammu in a car. Amid landslides, the administration did not allow Rahul Gandhi to proceed with his rally.

J&K Congress chief Vikar Rasool Wani said that after a march of 5-6 km, the participants were supposed to walk for nearly 10 km in the second leg to reach Banihal. “Rahul Gandhi had to wait for 2-3 hours after which the district administration informed him about the risk,” he said.

January 26 was already a day’s break for the participants. “Due to poor weather and landslides, the afternoon leg of Bharat Jodo Yatra in Ramban and Banihal has been cancelled,” said senior Congress leader Jairam Ramesh in a tweet.

Meanwhile, a truck driver died when a boulder hit a few vehicles in Magerkote area on the highway early on Wednesday morning. Two persons in another truck were injured.

Ramban Deputy Commissioner Mussarat Islam said that due to overnight rains, boulders rolled down in Magerkote hitting a tanker and a truck. The injured were shifted to a hospital and a rescue operation was launched on the NH-44 which was blocked, he said.

Shooting stones continued at Mehar and Panthyal that kept the highway blocked till evening. Mohita Sharma, SSP (NH Traffic), informed that due to intermittent shooting stones at Panthyal and slide at Mehar, the NH was closed for traffic. Stones rolling downhills were also seen near Bisleri Nullah.

Alok Avasthi, CRPF’s DIG (Operations) in South Kashmir, said security forces were on alert and had put in place all measures along the Srinagar-Jammu highway for the safety of Rahul Gandhi's Bharat Jodo Yatra. PTI

Rains triggered landslides and shooting stones in Ramban district, resulting in closure of the Jammu-Srinagar highway. A boulder hit a few vehicles in Magerkote area of the district, killing a truck driver and injuring two in another truck.