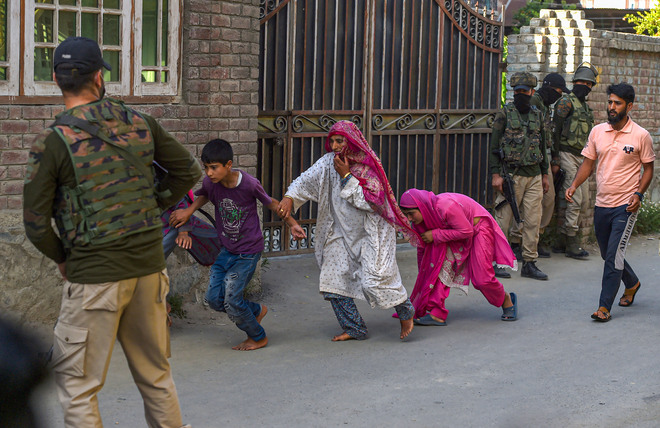 Security men rescue civilians during an encounter in Srinagar on Monday. Two CRPF men were hurt in the gunfight. PTI

Intelligence and investigative agencies today said the preliminary probe into the drone attack at the Indian Air Force (IAF) station in Jammu yesterday indicated the role of Lashkar-e-Toiba (LeT) and the use of highly sophisticated explosive RDX, which also pointed towards likely involvement of Pakistan’s state actors in the blast.

Sources said two bombs, weighing over 2 kg each, were dropped from a height of about 100-150 m and activated by “impact charge”. The attack appeared to be closely linked with the recovery of a 6-kg IED by the Jammu police from an LeT operative that led to detention of at least three terror suspects, they added.

The agencies did not rule out the possibility of the drones having originated from the Indian side of border, but claimed these might have been activated by terrorists who infiltrated from Pakistan, sources added.

Meanwhile, a fresh attempt to attack a military installation with the help of drones was foiled by alert Army sentries at the Ratnuchak-Kaluchak station who fired at the unmanned aerial vehicles that then flew away. “Two separate drone activities were spotted over Ratnuchak-Kaluchak military area by alert troops,” Jammu-based Army PRO Lt Col Devender Anand said in a statement.

Officials in the security agencies said over 300 drones and unidentified flying objects had been sighted along the country’s western frontiers with Pakistan since August 5, 2019, particularly in Punjab and Jammu sectors. Personnel posted in forward areas were trying to find a suitable technology to check these objects, they added.

The security agencies were also testing some indigenous counter-drone technologies in varied terrain along the border.

Jammu: Nadeem Abrar, LeT commander involved in several killings, was arrested on Monday. “Big success for us,” tweeted Kashmir zone IGP Vijay Kumar. A pistol and a grenade were seized from him. TNS

Balasore (Odisha): India on Monday successfully test-fired its new generation nuclear-capable Agni Prime missile from a defence base off Odisha coast, an official statement by the DRDO said.