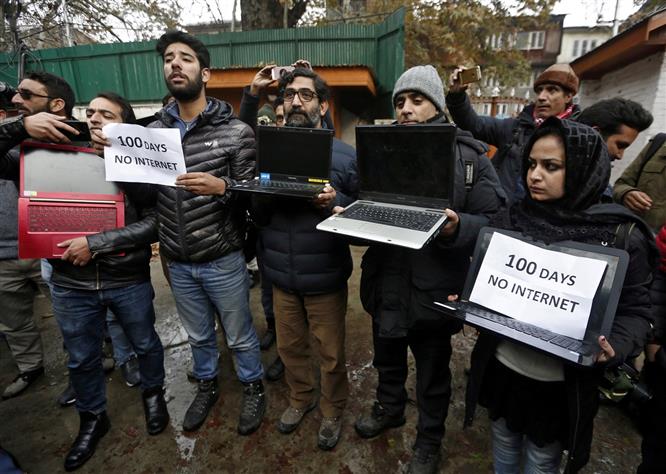 Kashmiri journalists display laptops and placards during a protest demanding restoration of internet service, in Srinagar on November 12, 2019. REUTERS

The Supreme Court on Friday asked the J-K administration to review all orders of suspension of the Internet.

Historic judgment, this time court did not come under any pressure: Azad on SC’s J-K ruling

Trade and commerce through the Internet is protected under Article 19(1)(g) of the Constitution which guarantees the fundamental right to trade, business, occupation or profession, it said.

On prohibitory orders under Section 144 of the CrPC, the court said it could not be used as a tool to suppress difference of opinion.

It said the administration could not refuse to produce the orders issued after scrapping of Article 370.

The Bench headed by Justice NV Ramana said the test of proportionality needed to be satisfied. The freedom could be restricted only after relevant factors were considered and only if there were no other options.

The apex court ordered forthwith review of orders suspending the Internet in Jammu and Kashmir, saying such suspension could not be for an unlimited period. It could only be for a limited period and was subject to judicial review, it added.

Internet suspension without a particular duration and indefinitely is a violation of the Telecom Rules, the top court said. It ordered the J-K administration to produce all orders invoking Section 144 of the CrPC.

While issuing restrictive orders under Section 144, a magistrate should apply his/her mind and apply doctrine of proportionality to strike a balance between danger to national security and liberty of citizens. Repetitive orders under Section 144 without assigning reasons and without being based on material facts would violate citizens’ right to various freedoms, the court noted.