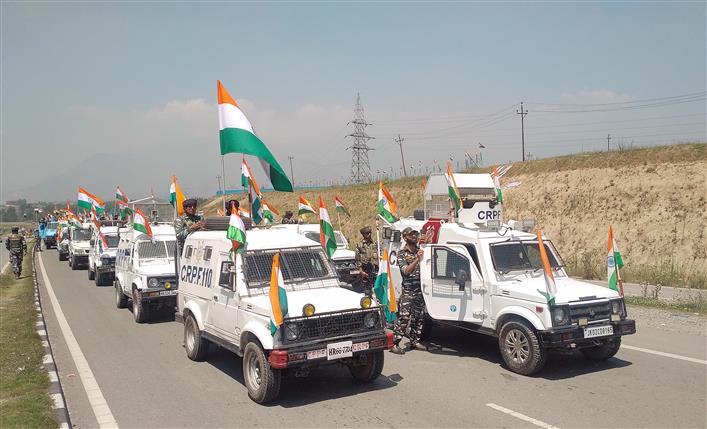 CRPF personnel during a Tricolour rally in Pulwama. ANI

Two days after a migrant worker from Bihar was shot dead in Bandipora, Lieutenant Governor Manoj Sinha on Saturday said the time had come to strike the last nail in the coffin of terrorism and that would be done within one year.

“We have lost many innocent lives. It has to stop now. Your younger generation should not face the hardships their forefathers went through. They must make the nation proud,” the LG said at the inauguration of 1,000 ‘amrit sarovars’ across J&K at an event in the SKICC, Srinagar.

The Lieutenant Governor also kicked off the Har Ghar Tiranga campaign in the Union Territory by distributing national flags among the Raj Bhawan staff members in Srinagar. Paying tributes to the martyrs and the freedom fighters, he appealed to the people to put up the Tricolour at their houses.

Sinha also inaugurated 75 homestays in rural areas, owned by self-help groups under the J&K Rural Livelihoods Mission (JKRLM), in partnership with a private firm under project ‘Crown of Incredible India’. He said 200 more homestays would come up by December 2022.

As many as 75 villages were selected across J&K for the establishment of homestays.

Shahid Iqbal Choudhary, Secretary, Tribal Affairs Department, and CEO of the Mission Youth, said the government had been reaching out to youth and women to realise the vision of inclusive development.

In Ladakh, Lieutenant Governor RK Mathur got installed the Tricolour at the historically important Leh Palace to mark the official launch the Har Ghar Tiranga campaign in the cold desert. He said the administration and the hill councils had made efforts to make the campaign successful. He lauded the response of the Ladakh people who installed the National Flag at their offices, shops and houses.

Meanwhile, ahead of Independence Day celebrations, Lieutenant General Upendra Dwivedi of the Northern Command arrived in Srinagar to review the security in Kashmir. Accompanied by Lieutenant General ADS Aujla of the Chinar Corps, he visited several places in forward areas along the LoC and received briefing on the prevalent security situation and measures instituted to counter adversaries’ design and development works being undertaken by the Army. A 72 feet high Tricolour was also hoisted by residents of Keran along the LoC in the presence of Lt Gen Dwivedi, who felicitated five civilians at the headquarters of the 15 Corps for their efforts in promoting peace. Those felicitated are Mehraj Khurshid Malik and Arshid Rasool from Srinagar, Jameela Begum from Kupwara, Sahil Muzaffar from Sopore and Mir Mehak Farooq from Kulgam.

"He lauded the strong counter-infiltration grid along the LoC. He also appreciated the strict control exercised by the formation to abide by the ceasefire understanding," an Army spokesperson said.

On the occasion, a cultural programme was also held that saw the participation of schoolchildren, he said.

Later, Lt Gen Dwivedi also interacted with police and civil officials. He appreciated the steps being taken by all agencies for the maintenance of peace in Kashmir and ensuring its development, the spokesperson said.