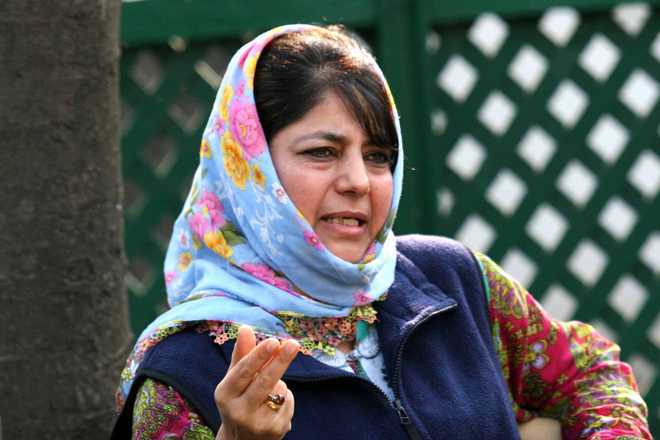 The development came a day after the Chief Electoral Officer Hridesh Kumar held an all-party meeting in Jammu where political parties except the BJP objected to the inclusion of outside voters in the electoral rolls which are being prepared for upcoming Assembly election.

"According to reports, verbal orders were passed at an administrative meeting in Baramulla on Monday by district Tehsildar to enroll non-local labourers, CISF, CRPF, BSF and army personnel as voters. Administration must come clean on this," Mufti tweeted on Tuesday.

According to reports, verbal orders were passed at an administrative meeting in Baramulla yesterday by district Tehsildar to enrol non-local labourers, CISF, CRPF, BSF & army personnel as voters. Administration must come clean on this.

On August 16, Kumar said that a person would not need to hold a J-K domicile to be a voter in the UT and 20-25 lakh new voters are expected to be added to the electoral roll that is being prepared.

In August 2019, the Narendra Modi-led BJP government scrapped Article 370 and its corollary Article 35-A which provided constitutional safety to jobs, land and citizenship of the local residents.

Prior to that, outsiders were not eligible to apply for citizenship or buy land.

The domicile certificates and voting rights have been given to hundreds of thousands of Valmikis and West Pakistan refugees who have been living for decades in different parts of Jammu.

As per the 2011 Census report, Jammu and Kashmir has 2.8 million non-local migrant workers and among them, 14 lakh have already been living in the region for 10 years or longer. Around 12 per cent or 3.35 lakh of them have been living there for five to nine years.

Since the 2011 Census is ten years old, both these categories of non-local migrants fulfil the 15-year rule prescribed for securing domicile certificates. It also means that 17.35 lakh people can certainly acquire domicile rights, which constituted roughly 14 per cent of J-K’s 13 million population in 2011.

As per the 2011 Census, 66.9 per cent of Jammu and Kashmir’s 13 million population is Muslims, while Hindus constitute 30 per cent and Sikhs 2 per cent.

Locals fear a settlement of 2 million non-local population will alter the demographic composition of Jammu and Kashmir.

Also, Jammu and Kashmir has more than half a million Indian troops who are also eligible to vote in areas which are not covered under the Disturbed Areas Act.