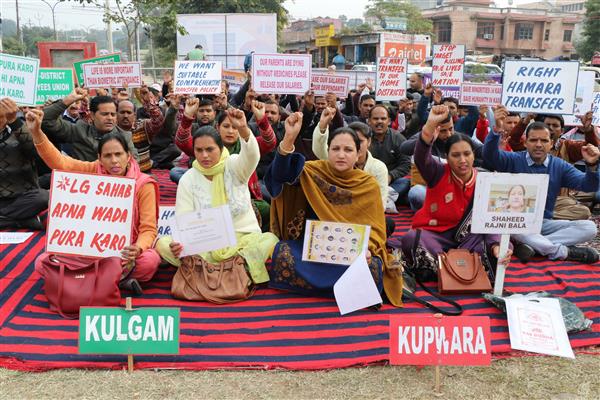 Jammu-based government employees, posted in Kashmir, raise slogans during a protest demanding their transfer to their home districts. PTI Photo

Kashmiri Pandits working in the Valley are in a state of panic after a terrorist group released a hit list of 56 employees from the community.

In the aftermath of targeted killings by terrorists, several Kashmiri Pandits employed in the Valley under the Prime Minister's Rehabilitation Package (PMRP) have shifted to Jammu and are on a protest for over 200 days demanding relocation.

They have been camping outside the rehabilitation commissioner's office here.

Recently, a blog linked to The Resistance Front (TRF), an offshoot of the Lashkar-e-Taiba, published a list of 56 Kashmiri Pandit employees under PMRP, and warned of mounting attacks on them.

He said the latest warning cannot be dismissed as a propaganda as "they (terrorists) have all relevant information about the employees".

Demanding a probe into the leak of names to terrorists, Zutshi said it shows the terror ecosytem is deep-rooted and needs to be dismantled by taking stern action against overground supporters.

"The government must find out who leaked such vital information to terrorists. The police should take such things seriously and ensure the safety of those employees who are still stationed in the Valley," he said.

Another employee Rakesh Kumar said their demands for the past 208 days have gone unanswered.

"The government is stopping our salaries and using pressure tactics to force us to move back to our place of postings in the Valley. How can we even think of returning in such a situation?" he said.

Kumar said the Kashmiri Pandits have decided not to rejoin their duties in the Valley as it is directly related to their "life and death".

"We can work only if we are alive...the government should immediately relocate us to save our families who are suffering immensely, both mentally as well as financially," he said.