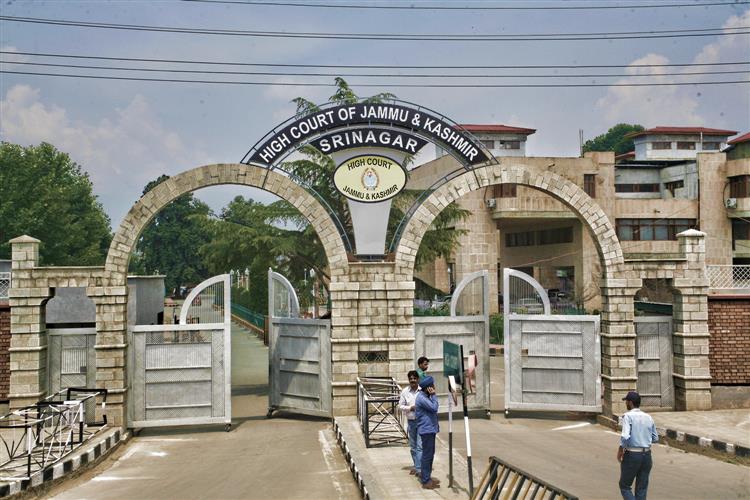 The Jammu and Kashmir High Court on Wednesday issued notices to the Centre and the state administration on a petition filed by the father of Amir Magray, one of the four people killed in an encounter in Srinagar’s Hyderpora area last year, seeking the return of his body for last rites.

The court has given 10 days’ time to the respondents and set January 27 as the next date for hearing for the case.

Magray’s father Mohammad Latief had filed a petition on December 30 last year after his repeated pleas for the return of the body were turned down.

A special investigation team (SIT) of police probing the encounter revealed that while one civilian was killed by a foreign terrorist, two others, including a local “militant” (Magray), died in crossfire after being used as human shield by the hiding ultra.

However, Latief rejected the police’s version and knocked the doors of the high court to press for the return of his son’s body, mentioning his “innocence” and the family’s long contribution in the fight against terrorism in his 18-page petition.

Latief’s lawyer Deepika Singh Rajawat told PTI that the petition came up for hearing in the Srinagar-wing of the high court before a single bench headed by Justice Mohan Lal who issued a notice to the Union of India and others to file their response within 10 days.

Rajawat said the next date of hearing in the case was set on January 27.

A Pakistani terrorist and three other people were killed in Hyderpora on November 15, 2021 and the police claimed that all the slain men had links to militancy. The families of the three, alleging foul play, had claimed that they were innocent, prompting the police to order the inquiry. Separately, Lt Governor Manoj Sinha had ordered a magisterial probe into the incident.

“...That being close to Amir, the petitioner knew everything good and bad about him, thus can state on oath that his son was never involved in any anti-national activities nor was he associated with any such outfit that conspires to bring harm to the nation,” Latief, a resident of Gool area of Ramban district, said in his petition.

Invoking Article 21 of the Constitution, which extends the right to have a decent burial according to religious ceremonies, for his son, Latief said he was instrumental in fighting and curbing militancy in Gool and Singaldan areas by working as a civilian volunteer with the Army.

He referring to an incident of August 6, 2005 when he, along with his wife and other family members, killed a Lashkar-e-Toiba (LeT) terrorist who had entered his house and fired indiscriminately upon the inmates. The petitioner said he was given the State Award for Bravery for 2012 by the Jammu and Kashmir government for showing exemplary courage despite being injured in the firing which also resulted in the death of his cousin.

“That apart from the same, the petitioner has been well appreciated by the Indian Army for his service towards the nation in eliminating militancy in his area i.e. Gool Sangaldan, Ramban,” the petition said, enclosing copies of appreciation letters and certificates given to him by authorities in acknowledgement of his services.

The plea said that in view of the family’s open support to the Army by going against anti-national forces, the petitioner has remained vulnerable to attacks, owing to which security was provided to them, which is still in place outside their house.

“...it is obvious that Amir was groomed in an atmosphere of patriotism and away from anti-national activities and forces, thereby associating Amir with terrorism is not justified to any stretch of imagination and shall also discourage all those who hold India close to their hearts and are fighting terrorism in difficult situation in Jammu and Kashmir, without caring about their lives and families,” the petition read.

Referring to the exhumation and return of the bodies of two others, a building landlord and a doctor with whom Amir was working as an office peon on November 18, the petition pleaded the court to direct the respondents, including the Union Home Ministry, J&K administration and the director general of police to hand over Magray’s body to the family.

“The magisterial probe was time-bound and was supposed to submit its report within 15 days but despite passage of more than one month, no such report has been submitted so far,” the petition said.

It said the petitioner met the Lt Governor on December 7 to press for the return of the body and to make magisterial probe public, for which two days’ time was sought to make the report public, but “since then two weeks have lapsed, giving cause of action to the petitioner to approach this court by way of filing the present petition”.

The petitioner said he and his wife are grieving and restless as the respondents have not even given them a chance to see their son’s face the last time.

Expressing his wish to bury his son close to his house, Latief said the burial would be ensured within a prescribed period after exhumation and in an atmosphere required to maintain peace.