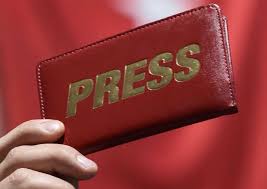 The “New Media Policy”, adopted recently by the J-K administration, is being criticised by various quarters with the international media rights watchdog, Reporters Without Borders (RSF), demanding its immediate withdrawal.

The J-K administration approved the New Media Policy 2020 earlier this month stating that the policy was aimed for effective communication and public outreach by the government.

Further explaining its objective, the Union Territory administration said the policy aimed to “thwart misinformation, fake news”, besides attempting to “develop a mechanism that will raise alarm against any attempt to use the media to vitiate public peace, sovereignty and integrity of the country”.

However, close scrutiny of the media policy by the journalists and media rights organisations has evoked sharp criticism of it, with the Reporters Without Borders dismissing it as an “Orwellian Press Policy”.

“The RSF calls for the immediate withdrawal of the ‘New Media Policy’ under which the government assumes the right to harass journalists and media judicially and economically if they publish content it doesn’t like. It amounts to prior censorship,” the RSF said in a statement on Friday.

Openly declaring that it aims to “foster a genuinely positive image of the government”, the 53-page policy statement gives Jammu and Kashmir’s Department of Information and Public Relations (DIPR) the de-facto right to exercise pre and post-publication control over all journalism in the territory for the next five years.

It says the DIPR will conduct a “background check” of every publisher, editor and reporter before their media outlet is granted “empanelment” — its term for official approval. And it adds: “Any individual or group indulging in fake news, unethical or anti-national activities or in plagiarism shall be de-empanelled besides being proceeded against under the law.”

“As there is no definition of what constitutes fake news or anti-national content, the government has absolutely infinite interpretative leeway to censor any journalism it does not like and to impose its own narrative,” said Daniel Bastard, the head of RSF’s Asia-Pacific desk said in the statement.

“The only version the authorities want to hear is their own. The truth will be the biggest casualty of this Orwellian order,” Abdullah said in a tweet earlier.

The PDP has also termed the new policy introduced by J&K government “as an assault on the freedom of the press” while demanding its rollback.