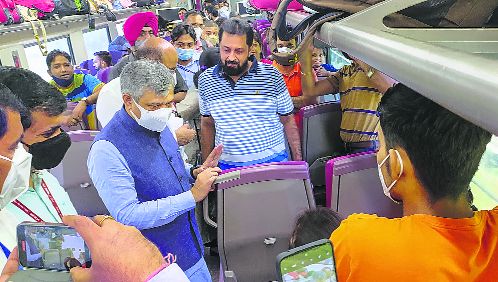 Union Railway Minister Ashwini Vaishnaw arrives at the Katra railway station aboard a train from New Delhi on Monday. PTI

It is the dream of the nation to see the rail connectivity between Kashmir and the rest of the country, Railway Minister Ashwini Vaishnaw said on Monday, asserting that the work on the prestigious Jammu-Baramulla project was going on at a fast pace and would be completed soon.

The minister was in Katra, the base camp for the pilgrims visiting the Mata Vaishno Devi shrine in Reasi district, where he attended a public outreach programme and laid the foundation for the construction of two new railway platforms.

He said PM Narendra Modi had a very big vision for the railways — all the railway stations are neat and clean, people get better facilities and the train chugs on time.

Asked about the time frame for completion of the Rs21,653-crore Udhampur-Srinagar-Baramulla rail link, Vaishnaw said this was the dream of the nation and the work on this project is going on at a fast pace. He said he would return soon to review the progress. — PTI