JK conversion row: One of 4 Sikh women had approached HC for protection against harassment by family

Sikhs in Kashmir, supported by community members from Delhi, have held protests against such interfaith marriages 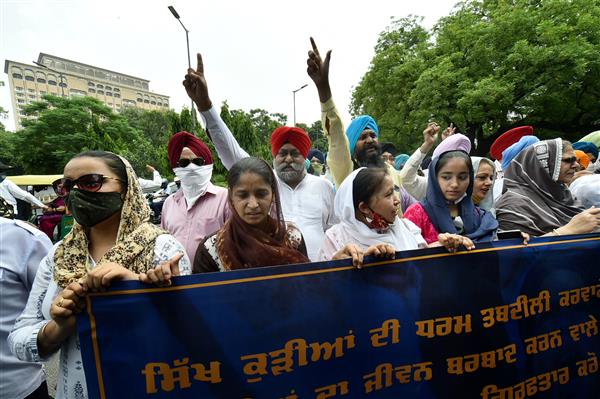 Members of Jago Party stage a protest outside J&K House over the abduction of a Sikh woman in Srinagar and her alleged religious conversion, in New Delhi. PTI

One of the four Sikh women alleged to have been converted to Islam by force had approached the Jammu and Kashmir High Court seeking protection from any coercive action by her family and the police, saying she changed her religion and married a Muslim man willingly.

Viran Pal Lour, who became Khadeeja after marrying Manzoor Ahmad Bhat on January 20 this year as per Islamic rituals, had approached the high court in May this year.

In an order passed on May 20, Justice Ali Mohammad Magrey had directed the police to ensure the woman’s parents—Rattan Singh and Popinder Kour—or anyone else at their behest does not harass, attack, kidnap or harm the couple.

“…and they shall be allowed to live their married life the way they like and protect their rights in terms of the guarantee as enshrined by the Constitution of India,” the order said.

The woman (26) and her husband (31), who declared their marriage before the public notary in Budgam district court in February, had told the court that they were living like nomads as her parents had lodged a complaint at Satwari police station in Jammu against Manzoor.

The court had directed Satwari SHO not to take any coercive action based on the complaint. It had also asked the Budgam police chief to ensure the implementation of the directions in letter and spirit.

Sikhs in Kashmir, supported by community members from Delhi, have held protests against such interfaith marriages and alleged that Sikh women were being forcibly married off to older men.

Shiromani Akali Dal leader Manjinder S Sirsa, who also arrived here on Sunday for the protest, has said they have taken up the issue with Jammu and Kashmir Lieutenant Governor Manoj Sinha and Union Home Minister Amit Shah.

“We have been protesting for two days. Four girls have been forcibly converted including an 18-year-old who was married to a middle-aged man and it was said she was married according to her own will,” Sirsa had said on Monday. PTI