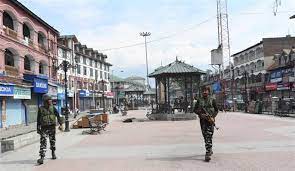 The J&K administration has ordered the freezing of boundaries of all administrative units, including districts and tehsils, in the Union Territory till the completion of the Census 2021, officials said.

The step is aimed at paving the way for the process of conducting of Census in Jammu and Kashmir, they said. “In exercise of the power conferred by Clause (iv) of Rule 8 of the Census Rules, 1990 and in supersession of all notification issued in this behalf, the J&K government hereby freezes the boundaries of districts and tehsils, municipalities, towns, revenue villages and other administrative units in the whole Union Territory with effect from first of July, 2023 till completion of Census 2021,” a notification issued by the Planning Development and Monitoring Department said.

Before every Census, states are required to provide information on changes in the number of notified districts, villages, towns and other administrative units such as tehsils, talukas and police stations to the Registrar General of India, the officials said.