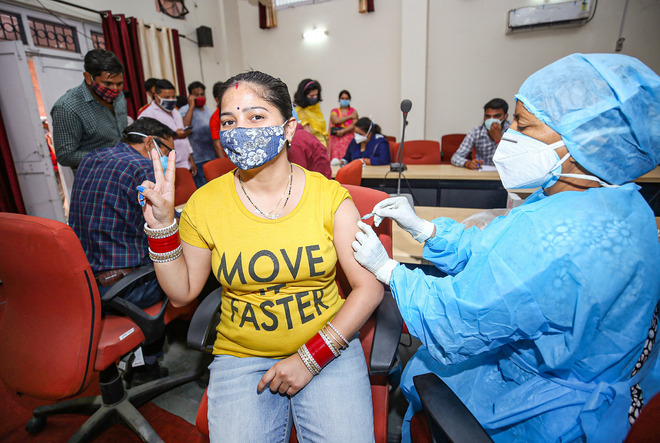 A woman receives a vaccine dose in Jammu on Tuesday. PTI

J&K on Tuesday recorded 715 fresh Covid cases, taking the total number of infected persons to 3,08,726, while 10 deaths took the toll to 4,205, officials said. Out of the fresh cases, 218 were from the Jammu division and 497 from the Kashmir division. Srinagar district recorded the highest of 132 cases, followed by 65 in Kupwara district. The active cases have dropped to 12,407 in the UT, while 2,92,114 patients have recovered so far.

Meanwhile, officials said there were 21 confirmed cases of mucormycosis (black fungus) in the UT with the surfacing of a new case.

Ladakh saw 50 fresh cases and one death. Its caseload climbed to 19,611 and the death toll rose to 198. Of the fresh cases, 36 were reported from Leh and 14 from Kargil, they said.

Officials said the active cases stood at 572, including 446 in Leh and 126 in Kargil. So far, 143 people have succumbed in Leh and 55 in Kargil. As many as 3,652 samples were taken for testing in Ladakh the previous day, officials said. A total of 135 patients were discharged the previous day after recovering from the infection. With this, the number of cured persons has increased to 18,841. — PTI