J&K Paharis to get reservation: Amit Shah : The Tribune India 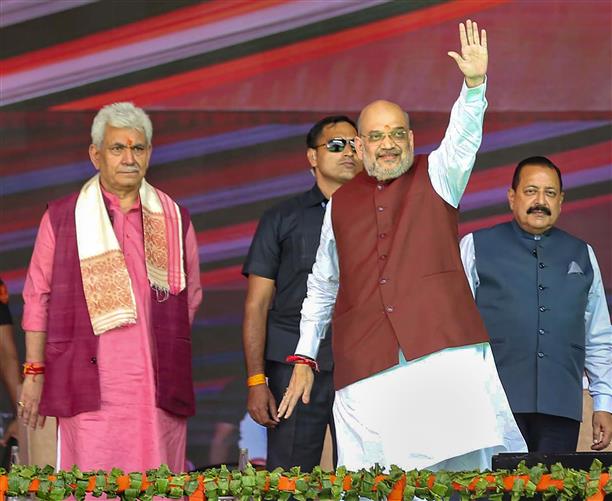 Addressing a rally in Rajouri, Shah also assured the Gujjars and Bakerwals that there would be no decline in their Scheduled Tribe (ST) quota. The two communities were opposed to Paharis being granted ST status. He said the reservation benefits to the Paharis would be provided in accordance with the recommendations of the Justice GD Sharma Commission, which examined the issue of quota.

“Some parties always wanted to deny the Paharis their rights. The Centre will now ensure justice to them. This has become possible only because Article 370 was abrogated,” he said. Shah alleged that due to vested interests, a few political parties had been instigating the Gujjars and Bakerwals that their quota would be diluted. “The reservation to Paharis will be given after proper administrative process is followed,” he said. A large number of Paharis had come to the rally anticipating the announcement on reservation. Delegations of Paharis and Gujjars also met Shah soon after he landed in Jammu on Monday evening, sharing their concerns.

The Gujjars and Bakerwals, the third largest ethnic group in J&K after Kashmiris and Dogras, constitute 40 per cent of the population in the border districts of Rajouri and Poonch. Since April 1991, they have enjoyed benefits of 10 per cent quota for STs in jobs and educational institutions. Paharis also live in the same area but they are numerically small. The Paharis are also seeking same benefits, which was opposed by the Gujjar and Bakarwals.

Shah targeted Kashmir-based parties claiming his rally in Rajouri was an answer to those who claimed the region would witness bloodshed if Article 370 was abolished. “Earlier, only three families used to rule J&K and never shared the benefits of democracy with the people. Loot and corruption were rampant. However, after Prime Minister Narendra Modi abrogated Article 370, democracy has reached the grassroots,” he said.

Claiming that the security situation in J&K had improved significantly, Shah said only 721 terror incidents were reported after the abrogation of Article 370 in 2019.

Tazeem Dar, Peoples Democratic Party (PDP) spokesperson and a Pahari leader from Rajouri, hailed the announcement. “The Paharis have waited for this for a long time,” said Dar.