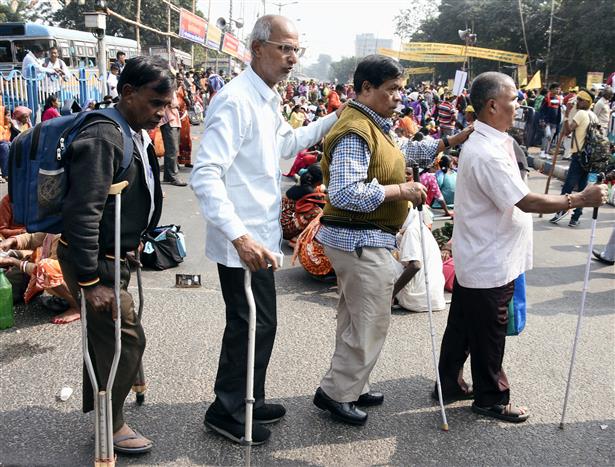 Members of the J&K Handicapped Welfare Association during a protest over their demands regarding welfare schemes on the occasion of International Day of Disabled Persons, in Jammu on Saturday. ANI

The administration is mulling engaging interpreters at all government functions to promote sign language, a senior government official said on Saturday, as the UT organised several functions to mark the International Day for Persons with Disabilities here.

Sheetal Nanda, Commissioner Secretary, Social Welfare Department, said the government was taking coordinated and concerted efforts to ensure all facilities were provided to the specially abled population. “The thought process has started and we have already decided that in order to promote sign language, we would ask for interpreters in all government functions (to make the events more accessible to the target population),” Nanda said at a programme here.

The programme titled ‘Transformative solutions for inclusive development: The role of innovation in fuelling an accessible and equitable world’ was organised by the social welfare department in support of UNICEF and ELFA international.

She said a lot of steps had been taken to make the ecosystem accessible to the people with disabilities and also provide them with whatever facilities that should be there for them.

Meanwhile, members of the J&K Handicapped Welfare Association staged a protest in Jammu in support of their demands regarding welfare schemes.