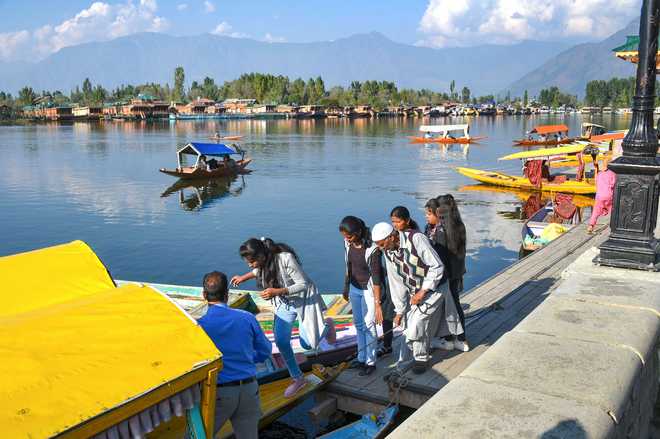 The tourism sector in Jammu and Kashmir is all set to re-open, and the government is in the process of announcing a date soon. Image only for representational purposes

The tourism sector in Jammu and Kashmir is all set to re-open, and the government is in the process of finalising and announcing a date soon.

The government has started preparing the blueprint that would be made public soon to revive the critical service sector in J&K. The hospitality sector sustains the livelihoods of tens of thousands of  J&K residents. Several families have been connected to the hospitality industry for generations.

“This sector, seen along with Handloom, handicrafts and horticulture sectors forms the core of the J&K economy, as all the three are interlinked,” government spokesperson Rohit Kansal told The Tribune.

In a tweet on Monday night, Kansal said: “J&K to re-open for tourism soon. Government to issue detailed guidelines and SOP shortly.”

The LG had given the directions to re-open the tourism sector taking into consideration all the vital aspects of sustaining the families dependent on this sector without making any compromise in fighting coronavirus.

The focus is on reviving tourism by granting opportunities to stakeholders to do what they know best to save their livelihoods. Second, it is to save lives versus lives- meaning that lives would be saved from virus and hunger as well, Kansal explained.

“All the areas known for attracting tourists will be opened, and this is being done after watching how France opened Eiffel Tower, and how Venice opened for tourists. Goa too has opened this sector,” he added.

Kansal said that standard operating procedures will have to be followed as the fight against the virus is going on.

“No compromise will be made in the fight against the virus,” he said.

Tourism in Jammu and Kashmir had suffered its worst period during the coronavirus.

Against tens of thousands of tourists swarming the Valley at this point of the year, there is not even a single one today.

Jammu, which is a hub for religious tourism, particularly Shri Mata Vaishno Devi shrine pilgrimage, has not hosted any tourists since the lockdown began in March.

Kashmir tourism suffered a blow after the August 5 decision of scrapping Article 370 that resulted in a shutdown that lasted several months.

For the first time in the history of Kashmir, tourists and Amarnath pilgrims were asked to vacate Kashmir Valley on August 2.