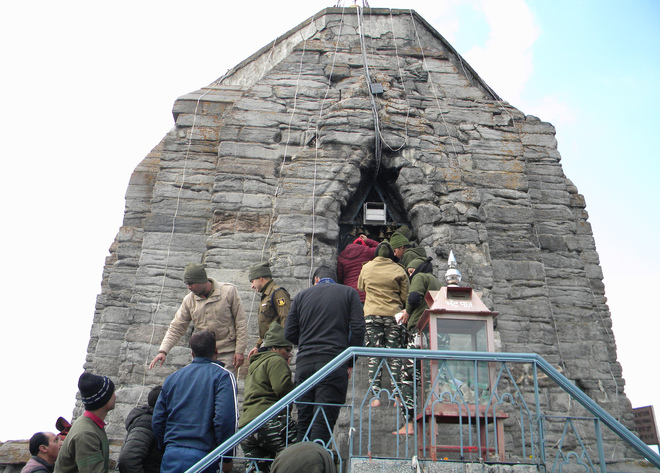 Devotees queue up to offer prayers at Shankaracharya temple.

“Shivratri is celebrated as Herath in Kashmir and we offered nightlong puja, which ends in the morning. We consider the night holy as the marriage of Lord Shiva and Goddess Parvati had taken place on this night. Today, as per tradition, we observed ‘salam’ and visited the homes of our kith and kin to extend the Herath greetings,” said Chunni Lal Bhat, president, Hindu Welfare Society Kashmir.

He said as part of the distinct Herath celebrations in Kashmir, Pandits pray to Lord Shiva and Goddess Parvati with the offering of walnuts, which are placed in a ‘watuk’ (earthen pot).

“Walnuts are later distributed as ‘prasad’. Among other delicacies, Pandits especially cook fish and lotus stem. We also clean our houses before Herath and go for whitewashing of walls,” Bhat added.

He said the local Pandits offered prayers mostly at their homes and did not usually go to temples on Shivratri.

However, a huge rush of devotees, mostly tourists and security personnel, was witnessed at the Shankaracharya temple in the city.