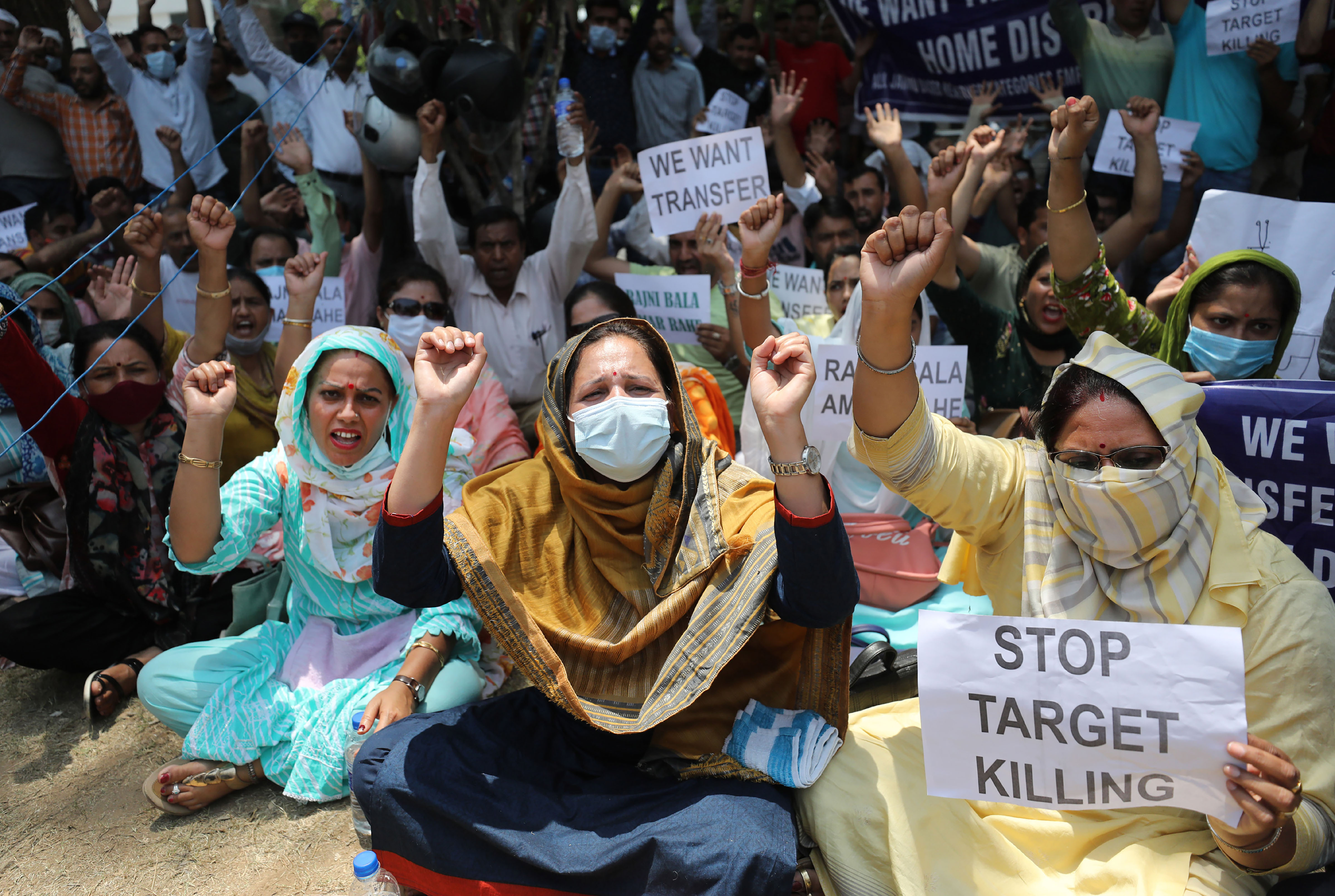 Employees during a protest in Jammu, demanding their transfer from Kashmir. PTI

Lieutenant Governor Manoj Sinha has blamed “some elements” in Pakistan for the fresh spate of killings in Kashmir, saying “they couldn't digest the robust economy and tourism here”. He also said terrorism was in its last leg. “Some elements on the other side are attempting to create instability. They can't digest the robust economy and tourism here,” Sinha told reporters on the sidelines of a government function in Shalimar area of Srinagar where he inaugurated a few projects related to smart city.

The government is only promoting movies while Pandits are witnessing what their forefathers saw. — Shadi Lal Pandita, Prez, Soan Kashmir front

“People of Kashmir understand and many, including religious preachers, have openly condemned the violence. When a lamp is about to go off, its flame flickers. It (militancy) is in its last leg, but they are trying for the return of those days (when militancy was at its peak). The administration and the security forces are preparing with their full might (to deal with it),” Sinha said.

He said a huge change has taken place in the mindset of the people in J&K.

In Jammu, Dogras and Kashmiri Pandits continued their protests demanding that employees from the minority community posted in Kashmir be relocated to Jammu in the wake of the targeted killings in the Valley.

Dogra employees assembled under the banner of the All Jammu-based Reserved Categories Employees’ Association at Panama Chowk here for the sixth day and staged a sit-in. A group of Kashmiri Pandit activists affiliated with the Prem Nath Bhat Memorial Trust held a protest at the Press Club here in support of the PM package employees who have been on a strike in the Valley since the killing of their colleague Rahul Bhat on May 12.

At the same time, a sense of uncertainty and fear prevails among the Kashmiri Pandit families in Jagti migrant camp on the outskirts of Jammu city. Expressing fear over the ongoing targeted killings in Kashmir, they say the government has failed to provide a secure environment to Hindus living in the Valley. They say they don't know what to do now amid violence in Kashmir.

The Jagti township along the Jammu-Srinagar highway in Nagrota has always been a grim reminder of the haunting situation in 1990s. Now, a renewed sense of fear has gripped the community.

The targeted killings have directed affected those employed in Kashmir under the Prime Minister's special employment package. A teacher, Usha, says, “I am reliving the stories I have heard about the genocide of Hindus in the Valley in 1990s. Those who talk about the atmosphere of brotherhood in Kashmir are lying. We can't trust even our colleagues in the Valley as they may be among those informing terrorists about Hindu employees.”

“Through mosque loudspeakers in rural areas, Hindus are being urged not to leave Kashmir. Such announcements are farce and we know what the reality is,” she asks.

Usha’s husband is still there in Kashmir.

Another teacher, Sandeep Kumar, says that the government gave employment in Kashmir but did no homework on how to settle them. “We had expectations from the BJP, but it did nothing for Pandits. We are struggling for our safety,” he adds.

Shadi Lal Pandita, president of the Soan Kashmir Front, says the BJP had assured that abrogation of Article 370 would allow Pandits to settle in the Valley. “The government is doing only politics and promoting movies depicting our miseries while Pandits are witnessing a situation their forefathers saw,” he adds.