Leaders and thinkers of J&K bat for interfaith dialogue 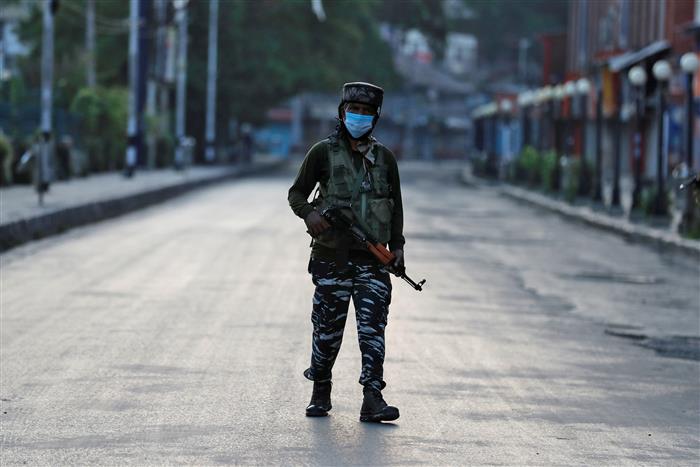 A Central Reserve Police Force officer patrols on an empty street during a lockdown on the first anniversary of the revocation of Kashmir’s autonomy, in Srinagar. Reuters

Political leaders and thinkers from varied shades of opinion in Jammu and Kashmir underlined the need for interfaith dialogue for return of full normalcy in the UT.

Taking part in a webinar on “Interfaith Dialogue: Jammu and Kashmir-The way forward”, many of the participants urged the Centre and the local administration to be sensitive to the concerns, and quotidian requirements of the public.

The event, which concluded late yesterday evening, was organised by Delhi-based Kashmir Peace Forum, which was floated in 2017 to promote peace and harmony among people.

One of the organisers of the event and leader of the Peace Forum, Satish Mahaldar said more seminars will be organised in future.

Even while there was near uniformity among the participants that Pakistan played devious role in fostering trouble in Jammu and Kashmir, they expressed concern at the alleged fall in quality of governance after Jammu and Kashmir was made an UT.

Taking part in the discussion, former CPI(M) MLA and member of his party’s Central Committee (CC) Yousuf Mohammad Tarigami expressed opposition to abrogation of Article 370 and 35A.

He lamented the forced migration of Hindus from Kashmir in the past.

“This has driven a hole in the collective soul of Kashmir,” he said.

As a way forward, Tarigami said, “First let us define the problem of Kashmir to formulate the process to solve it.”

RSS thinker Desh Rattan Nigam said that Article 370 had already been diluted several times before being scrapped in toto.

“The Centre has assured to restore statehood to Jammu and Kashmir...the government is making efforts to effect democracy at the grass-root level,” Nigam said.

He added that the “families” which had been ruling Jammu and Kashmir are the most disturbed at democracy deepening its roots.

Sameer Kaul of the NC echoed Farooq Abullah’s suggestion for a “commission of inquiry to know the reason behind exodus of Pandits from Kashmir”.

Leader of Jammu and Kashmir Workers Party Mir Junaid defended the Centre’s move to do away with Article 370 and 35A, saying they had been misused to curb rights of people.

“Grassroot democracy is taking shape,” Mir said, and added all central laws are now applicable in Jamu and Kashmir post creation of the UT.

Head of Awami National Conference Muzaffar Shah said, “We will not forget the abrogation of Article 370,” but pitched for interfaith dialogue, and understanding among regions and religions.