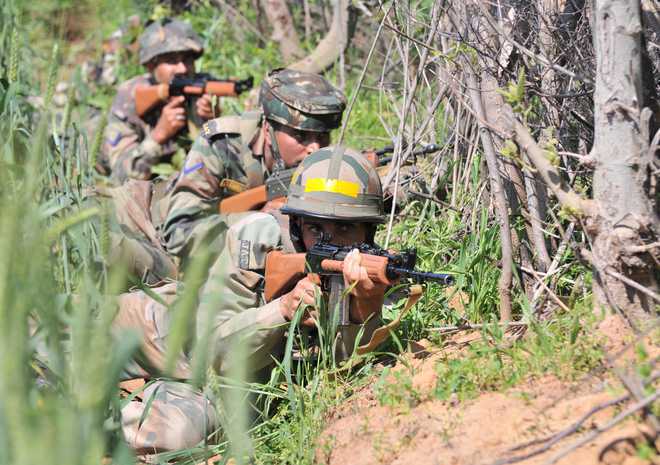 Two terrorists, including a top commander of Lashkar-e-Toiba, have been killed in an encounter with security forces in Shopian. File photo

Two terrorists, including a top commander of Lashkar-e-Toiba, have been killed in an encounter with security forces in Shopian. Officials in the security establishments said the troops also busted a module of the terror outfit with the arrest of a local militant and his four associates.

According to officials, security personnel launched a cordon-and-search operation in Check Sadiq Khan area of Shopian in south Kashmir late on Saturday night after receiving specific information about the presence of militants.

Both were responsible for a series of terror crimes, including getting youth recruited in terror ranks, in the Valley

Two AK-47 rifles, eight magazines and other arms and ammunition have been seized

They said the search operation turned into an encounter after militants opened fire at the security forces, triggering retaliation. “Two militants were killed in the encounter. One of the slain militants was identified as Ishfaq Dar, alias Abu Akram, a top commander of LeT. He had been active since 2017,” a senior police official said.

The Kashmir Zone police, in a Twitter post, stated incriminating materials, including arms and ammunition, were seized from the encounter site.

DGP Dilbag Singh said the other militant had been identified as Majid Iqbal Bhat.

Meanwhile, the police also confirmed that the security agencies had busted an LeT terror module in Budgam district by arresting a local terrorist and his four associates, all of whom were in touch with their Pakistan-based handlers through social media platforms.

Acting on specific information, personnel of the police, the Army and the CRPF arrested Mohammad Younis Mir, a local terrorist linked with the LeT, and seized incriminating materials, arms and ammunition.

Mir is a resident of Choon area in Budgam and from his possession a Chinese pistol, a magazine and eight live pistol rounds were seized, officials said, adding that his four associates were arrested following his interrogation.