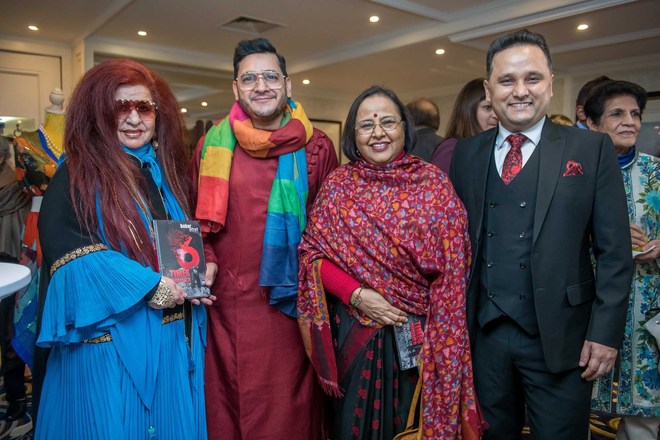 Pashmina activist Babar Afzal (second from left ) with dignitaries at The St James Court in London.

The High Commission of India in London organised an event to sensitise the Indian diaspora about the challenges and opportunities in the pashmina industry of India.

The high profile event was organised at the St James Court, London, and was attended by over 100 persons. The event was positioned as a celebration of pashmina and the prominent position it maintains within the textile industry of India. Babar Afzal, who is formally and informally quoted as ‘the most credible man on pashmina in the world’ was invited to share his work, journey and the vision ahead for the industry ecosystem at the international event. The documentary titled, ‘Call of Pashmina’, which was made on his life by international directors and has won over seven international awards, was screened at the event.

Afzal left his Silicon Valley career to highlight complex issues concerning the pashmina ecosystem which includes climate change leading to the displacement of nomadic and weaver communities, preservation of the diminishing species of the delicate pashmina goats, fight against exploitation by traders and middlemen, preventing demoralisation and depression among artisans and introduction of healthcare and education in the community. He humbly introduced himself as a student of life and sustainability, climate change and pashmina crusader who chose to become an artist and a shepherd eight years ago when he read news about death of 25,000 pashmina goats due to the impact of climate change.

Afzal has won multiple fellowships and awards for being among the top global geniuses. He was profiled by Time magazine in ‘The Genius Issue’. He was one of those profiled who have abandoned their comfort zone to understand and attempt to solve complex challenges faced by communities, industries and the planet. Afzal said there was a need to break the monopolies and “we will help open doors for everyone”. “There is a great demand for luxury products globally. Pashmina is the only true luxury product of India,” he said.