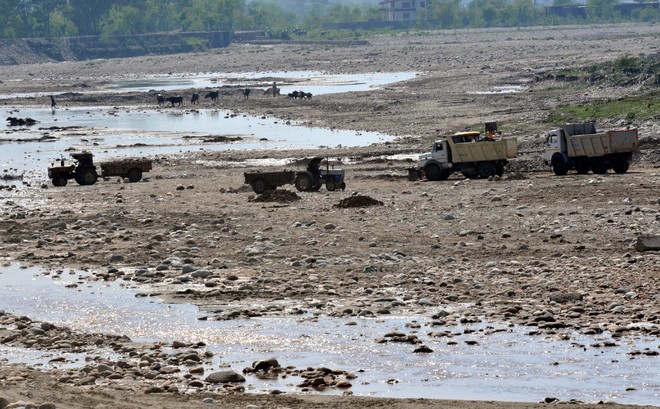 For the first time, a majority of the sand mining contracts along the Jhelum and its tributaries in Kashmir have been bagged by non-locals.

In Srinagar district, which has 10 mineral blocks along the way the Jhelum flows in the area, all 10 contracts have been bagged by non-locals, documents accessed by The Tribune showed.

In north Kashmir district of Baramulla, which has the highest 38 mineral blocks, contracts in 26 blocks for sand mining have gone to people from outside J&K.

In December 2019, more than 200 mineral blocks in the Jhelum and its tributaries across all 10 districts of the Kashmir were thrown open for mining the sand and the bids were invited online.

As per the documents, the Geology and Mining Department, J&K, which looks after the mineral blocks along the Jhelum, earned Rs 5.08 crore for awarding 10 mineral blocks in Srinagar to non-locals, whereas in Baramulla, the online bidding of 38 blocks fetched the department Rs 20.15 crore. In Baramulla, 26 contracts have been secured by outsiders.

In Budgam district, the sale of seven mineral blocks has fetched the department Rs 4.67 crore, where four contracts have been fetched by outsiders.

Even as the Department of Geology and Mining fetched good revenue from the sale of these mineral blocks, the result of high bidding prices has increased the prices of sand across Kashmir.

“I used to sell a sand tractor between Rs 2,500 and Rs 2,700. Now, the same quantity of sand is available to us from sand miners at a whopping Rs 3,500. That means we have to sell it between Rs 4,000 and Rs 4,500,” said sand dealer Mohammad Yasin from Khawajabgh Baramulla, where many such sand blocks along the Jhelum are located.

Meanwhile, there are growing environmental concerns as more and more extraction of sand from the Jhelum river bed has destroyed the natural habitat of fish.