On strike for months, Kashmiri Pandits' salaries to be withheld : The Tribune India

On strike for months, Kashmiri Pandits' salaries to be withheld 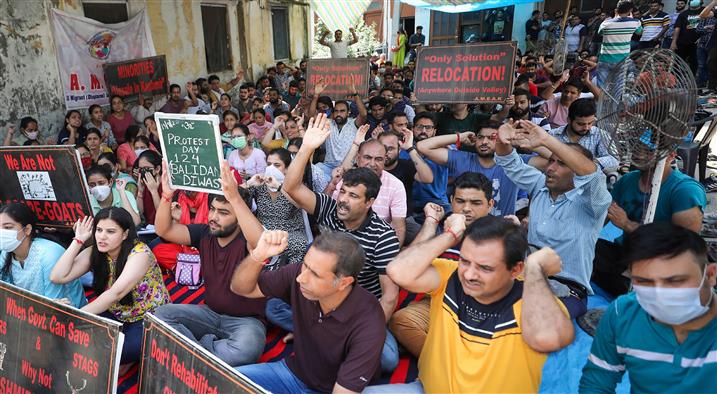 Several employee unions have been protesting in Jammu. PTI file

Officials in the J&K administration have issued orders to stop the salaries of Kashmiri Pandit employees who fled the Valley during a spate of targeting killings a few months ago. These employees have been protesting in Jammu, demanding their transfer from Kashmir.

Ahmad Hussain Bhat, Deputy Labour Commissioner, Kashmir, directed all assistant labour commissioners across the Valley to stop the September salaries of the employees absent from their duties. The department has sought the leave accounts of all the employees recruited under the PM employment package. A Pandit employee, who didn’t wish to be identified, said, “This is injustice. The government has failed to provide security to the employees and now wants them to return to Kashmir only to be killed.”

Though targeted killings had been going on since last year, the employees intensified their protest after Rahul Bhat, a clerk, was gunned down by terrorists in his office on May 12 this year.

Angered over the orders, striking employees intensified their agitation, which entered 133rd day on Thursday, calling the order a harassment and arm-twisting move to break their agitation. Hundreds of employees held protests under the banner of All Migrant (Displaced) Employees Association Kashmir, one of the organisations spearheading the agitation.

Nearly 4,000 Pandits are working in different departments in the Valley since their selection under the PM’s employment package.