Over 60,000 acres of encroached land retrieved in J-K: Govt 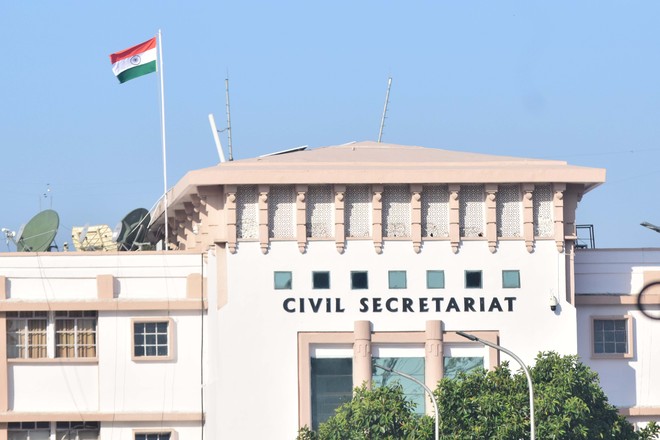 Civil Secretariat in Jammu. Photo for representation only

Over 60,000 acres of encroached land has been retrieved in Jammu and Kashmir, officials said on Wednesday.

R R Bhatnagar, Advisor to the Lt Governor, directed for creation of a dashboard for continuous monitoring of the removal of encroachments in the Union Territory.

Bhatnagar also asked the revenue department to red flag any instance of new encroachment or re-encroachment by fixing responsibility down the line showing no laxity in taking action against the responsible.

The Advisor made the remarks while assessing the performance of the revenue department at a meeting here which among others was attended by Commissioner Secretary, Revenue, Custodian General, Inspector General Registrations, Jammu and other officers of the department. Divisional commissioners participated through video conferencing, an official spokesman said.

Bhatnagar directed the Revenue department to create a dashboard for continuous and effective monitoring of removal of encroachments on government land.

He asked the officers to devise a mechanism under which no retrieved patch of land is re-encroached and also advised them to prioritise the commercial chunks of land to be retrieved first followed by others.

The Advisor also enquired about the process of digitisation of land records, expunging of illegal entries, reconstructing the missing records afresh and progress of revenue courts, the spokesman said.

Bhatnagar called for a comprehensive report on all the cases pending in the courts besides the timeline showing progress registered, so far.

The spokesman said the meeting was informed that digitisation of land records for Srinagar and Jammu is in its final stage and slated to be completed in February.

The work on updation of ‘Jamabandis’ in remaining districts is going to be completed in this month followed by digitisation of the same immediately in a decentralized manner, he said.

Regarding the settlement and digital survey of all 6,850 revenue villages, the spokesman said the draft survey manual has been prepared and the project management module is also under process.

The meeting also dealt in detail with the proposed roadmap for online services to get revenue extracts besides integration of mutation and registration system for real-time updation of revenue records without any extra encumbrance, he said.

With addition of about 127 slots a week in favour of each sub-registrar, the process of registration of properties has become quick and easy, the spokesman said.

He said around 60 percent increase in registration of properties through these offices has been made this year as compared to the previous year.