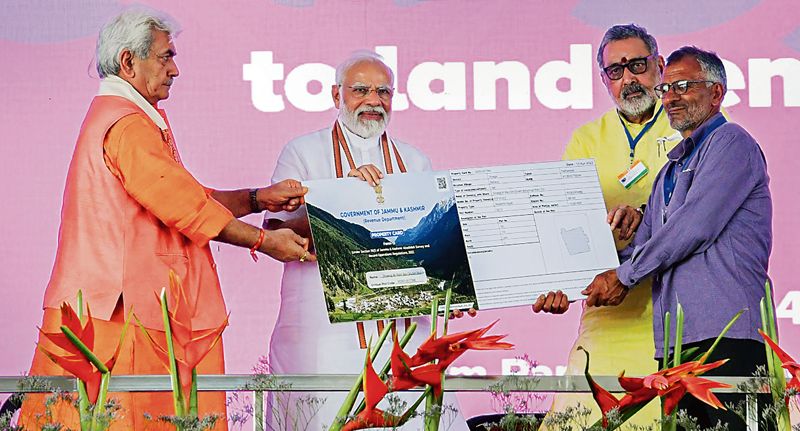 Prime Minister Narendra Modi during a rally at Palli village in Samba district on Sunday. PTI

Reaching out to the youth of Jammu and Kashmir, Prime Minister Narendra Modi on Sunday spelled out initiatives for peace and development and assured they would not inherit the problems faced by their parents and grandparents.

In his first formal visit to J&K after the abrogation of Article 370, the PM said, “Mark my words. The problems faced by your previous generations will not be faced by you. I will ensure this.”

PM Modi was on a visit to Palli panchayat in Samba district of Jammu on the National Panchayati Raj Day.

Stressing on how democracy and development are going hand in hand in J&K, PM Modi said this year’s Panchayati Raj Diwas, being celebrated here, marked a big change. “It is a matter of great pride that democracy has reached the grassroots level in J&K,” he said.

He inaugurated and laid the foundation stone of development projects worth Rs 20,000 crore. He said a new story of development was being written with many investors now interested in J&K. “In the past 70 years, investments worth only Rs 17,000 crore materialised here. But during the past two years, projects worth Rs 38,000 crore were initiated. Investors are coming to the UT without any fear now,” the PM said. Mentioning as to how women and the Valmiki community in J&K has benefitted in the recent years, the Prime Minister said 175 Central laws had become applicable in the Union Territory, benefitting women and deprived sections of society. “Anomalies in reservation have also been removed and the Valmiki community has been freed from the fetters that were put in their feet for decades,” he said.

Referring to his vision of ‘Ek Bharat Shreshtha Bharat’, the PM explained that the vision focused on connectivity and elimination of distances. “Distances, whether of hearts, languages, customs or resources, will be eliminated. It is our big priority today,” he added.

The Prime Minister addressed panchayats throughout the country through virtual mode in which he highlighted that the groundwater was getting polluted due to excessive chemicals and fertilisers being used in farming. “Panchayats must come forward and promote organic farming,” he added.

Palli village in Samba district became country’s first ‘carbon-neutral panchayat’ with 500 kilowatt solar plant. It will provide clean electricity to all 340 houses in the village

PM opened 8.45-km-long Banihal-Qazigund tunnel. It will reduce distance between Banihal in Jammu and Qazigund in Kashmir by 16 km and cut travel time by 1.5 hours