A policeman was injured on Monday when some unidentified men hurled a grenade in Doda district, officials said.

Jammu: Nearly 2.5 kg of RDX was used in the two bombs suspected to have been dropped by Pakistan-based LeT terrorists on the IAF station here through drones on June 27, officials said on Monday. The NIA probe indicated that the drones with bombs, containing nearly 2.5 kg RDX, came from across the border. While one of the bombs was laced with 1.5 kg of RDX, the other contained nearly 1 kg of RDX, the officials said. PTI

The incident took place when Zahoor Ahmed (45), working with the SOG of the J&K Police, along with another jawan, was on duty at the District Police Lines at Doda, said SP (Operation) Raj Kumar.

He said the attack took place in an under-construction building outside the Police Lines. “Though Doda is militancy-free, it could be the work of overground workers who want to revive militancy in the area,” the officer said. The injured cop was shifted to a government medical college hospital in Doda, where his condition is stated to be stable. Kumar said additional police and Army personnel have been rushed to the area to take stock of the situation. — PTI 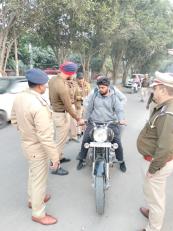