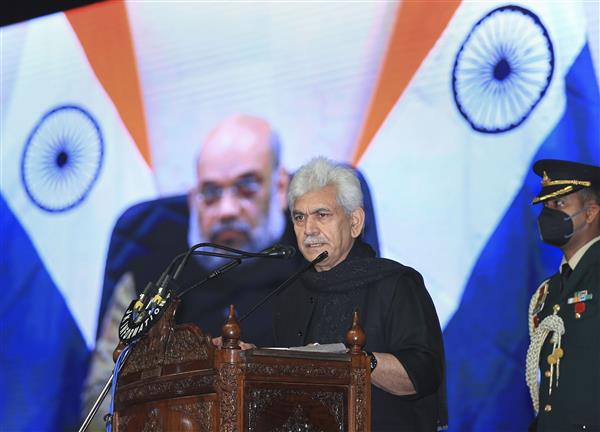 L-G Manoj Sinha speaks during the launch of the District Good Governance Index for 20 districts of J&K in Jammu on Saturday. PTI

Union Home Minister Amit Shah today reiterated that the J&K Assembly elections would be held once the delimitation process concludes and the statehood would be restored once the situation normalises in the UT. He also cautioned youth against getting misguided by forces of vested interest and asked them to participate in the new developmental journey.

Investments worth Rs50,000 cr to come

Virtually releasing India’s first District Good Governance Index, the minister said J&K was a priority for PM Narendra Modi and multi-pronged efforts were being made for the all round development of the UT.

He said democracy had reached the lowest level of society after implementation of the panchayati raj system and that was why some people were worried. “I want to appeal to everyone, especially the youths to ask these people a few questions. Those who are saying that the Valley’s land will be usurped, ask them whose land has been taken away so far. They had said no investment will come, but investment of Rs 12,000 crore has already come. Tourists arrivals have also gone up and Jammu and Kashmir is matching towards development,” he asserted.

Noting that some people claimed that until the Article 370 is restored, law and order could never be good, Shah said, “There has been 40% reduction in terror-related incidents and 57% reduction in deaths since abrogation.”

Meanwhile, PDP chief Mehbooba Mufti tweeted, “After quite literally terrorising people of J&K into silence to create a false normalcy narrative, the government’s admission that situation still isn’t normal is self contradictory. Also proves that silence shouldn’t be misconstrued as normalcy”.

People’s Conference president Sajad Lone questioned, “But who will define normalcy. In a federal structure, can we really use normalcy as an excuse to assume power”.

MY Tarigami, spokesperson of the People's Alliance for Gupkar Declaration (PAGD), stated, “One of the principle fundamentals of good governance is participation and representation, a right which continues to be denied to the people of J&K. Dilapidated roads, erratic power supply, inaccessibility of potable water, unemployment and social unrest is reflecting contrasting picture.”