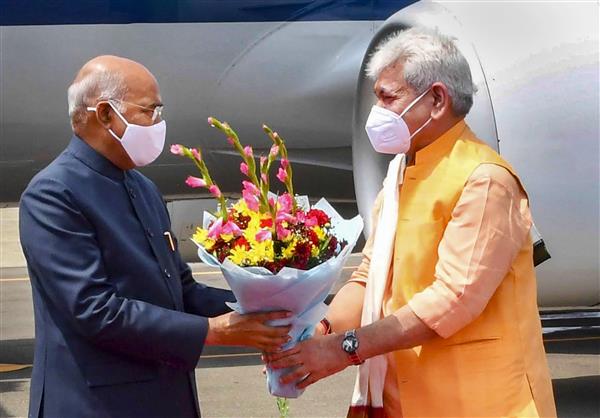 President Ram Nath Kovind arrived here on Sunday on a four-day visit to J&K and Ladakh, officials said. At the Srinagar airport, the President was received by Lieutenant Governor Manoj Sinha and senior officers of the police and the civil administration.

During the July 25-28 trip, the President will visit Dras in Ladakh to pay homage to the indomitable courage and sacrifice of the armed forces during the Kargil conflict of 1999 at the Kargil War Memorial on Monday on the 22nd anniversary of the Kargil Vijay Diwas, officials said.

Traffic on the two approach roads to Raj Bhawan, where the President will stay, has been diverted from Sunday to Wednesday

No traffic is allowed on Foreshore Road, along the famous Dal Lake from Dalgate and Nishat axis

In 2019, bad weather had prevented the President from visiting Drass to participate in Kargil Vijay Diwas so he paid tributes by laying a wreath at a war memorial at the Army’s 15 Corps headquarters in Badamibagh here. On Tuesday, the President will address the 19th annual convocation of the University of Kashmir here, they added.

As part of security measures for the President’s visit, traffic on the two approach roads to Raj Bhawan, where Kovind will stay, has been diverted between Sunday and Wednesday. A traffic official said diversions had been placed in some areas of the city and no traffic was being allowed on Foreshore Road, along the famous Dal Lake from Dalgate and Nishat axis, as well as towards Gupkar. — PTI