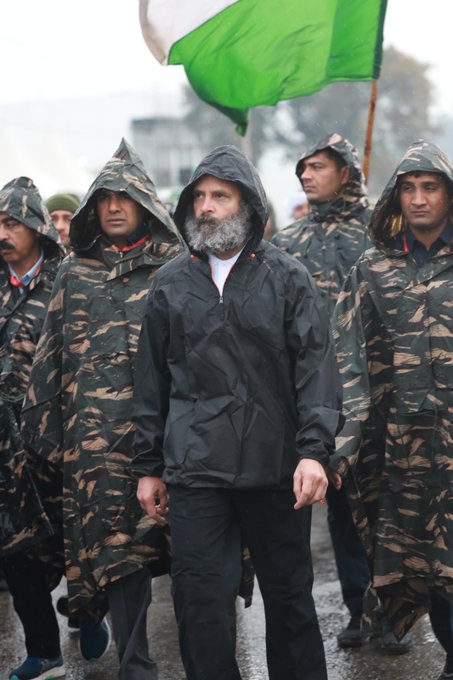 A video grab of Rahul Gandhi in a raincoat at the yatra.

Gandhi donned a black raincoat over a white T-shirt. The yatra was scheduled to start at 7am but was delayed by an hour and fifteen minutes apparently due to the inclement weather.

The march entered Jammu and Kashmir from Punjab on Thursday evening and is scheduled to end in Srinagar on January 30.

Several Congress leaders, including the party's Jammu and Kashmir unit president Vikar Rasool Wani and his predecessor GA Mir, accompanied Gandhi during the final leg of the Bharat Jodo Yatra.

Sanjay Raut said, "I have come to join the Yatra on behalf of my party. The atmosphere in the country is changing fast and I am seeing Gandhi as a leader who is raising his voice on real issues."

"The way people are connecting with this yatra is heart-warming. He is a leader and that is why he is on the roads. The people will choose (who would be their leader),” he added.