Rajnath Singh for befitting reply to Pakistan on LoC; exhorts forces to show zero-tolerance to terrorism : The Tribune India

Rajnath Singh for befitting reply to Pakistan on LoC; exhorts forces to show zero-tolerance to terrorism 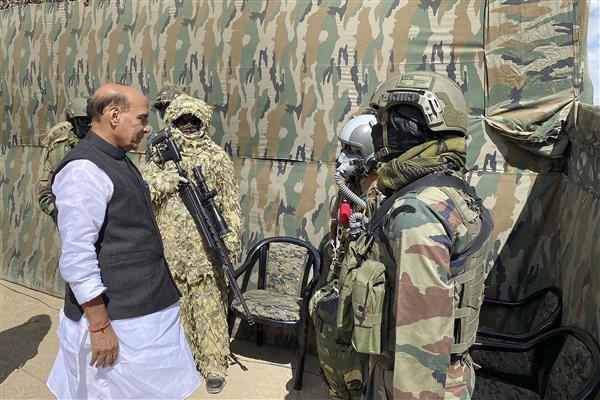 Defence Minister Rajnath Singh interacts with the troops who participated in the para dropping and other military exercises at Stakna, in Leh, Ladakh on Friday, July 17, 2020. (PTI Photo)

Defence Minister Rajnath Singh on Friday evening asked the army to show zero-tolerance to the infiltration bids from across the LoC as also to the ceasefire violations while reviewing the security situation of the Valley and its borderline with Pakistan occupied Kashmir (PoK).

He was interacting with the top army commanders, including Chief of Defence Services Gen Bipin Rawat and Army Chief Gen MM Naravane, J&K Lieutenant Governor GC Murmu. The UT Chief Secretary and the DGP represented the civilian administration in this crucial security review meeting held in Srinagar on Friday evening.

Rajnath Singh, who is on a two-day visit of Ladakh and Kashmir Valley, arrived in Srinagar Friday afternoon.

During his meetings, the situation along the LoC that has become hot because of frequent attempts being made by Pakistan to push in infiltrators from across the LoC. The Defence Minister said the forces should give more than befitting reply to Pakistani provocations, whether those were ceasefire violations or pushing of terrorists from across the borderline.

He also raised questions about the internal situation in the Valley where security forces have achieved stupendous successes against the militants. Nearly 130 militants have been killed this year alone.

Rajnath Singh was briefed about the situation in the Valley against the backdrop of Pakistan’s renewed attempts to cause the trouble in Kashmir. He was also apprised of all strategies that have been put in place to counter Pakistan’s designs

Earlier, in Ladakh, Rajnath had interacted with the troops and assured them that no power in the world could take even a single inch of the Indian territory.