Says India will emerge victorious in case of war, pitches for reclaiming PoK 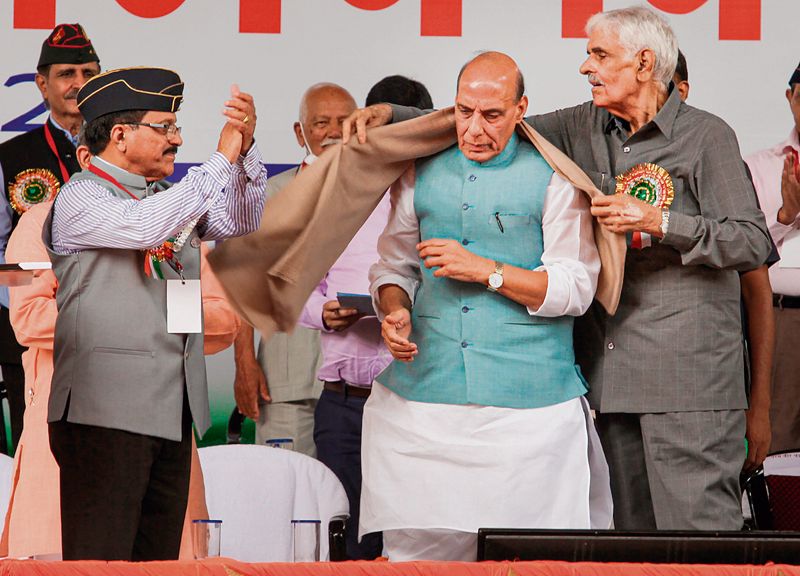 Defence Minister Rajnath Singh being felicitated at an event in Jammu on Sunday. PTI

Defence Minister Rajnath Singh on Sunday said India was well equipped to give a befitting reply to “anyone who cast an evil eye on us” and expressed confidence that the country would emerge victorious in case of any war. Pitching for reclaiming Pakistan-occupied J&K (PoJK), Singh said, “It is a part of India and will continue to remain part of this country. India defeated Pakistan in all the wars since 1947 and after bitter defeat, they engineered proxy wars.” He said Pakistan had tried to bleed India with a thousand cuts for over two decades.

After tasting defeat in the wars of 1965 and 1971, Pakistan adopted the path of proxy war. It has tried to bleed India for decades. Rajnath Singh, Defence Minister

At a programme of the Jammu Kashmir People's Forum to pay tributes to the Kargil martyrs, he said joint theatre commands of the tri-services would be set up to enhance coordination among the armed forces. India has been moving quickly from being the world’s largest importer of defence equipment to an exporter, he said.

Paying tributes to the Kargil martyrs, the minister said, “It is the duty of the people to give their utmost respect to the martyrs and their families. Whatever support you can offer, do for their families. It is the responsibility of each citizen.”

Singh remembered the then PM late Atal Bihari Vajpayee for his leadership and words of encouragement to the soldiers during the Kargil war despite numerous challenges and international pressure. Terming Article 370 as an artificial legal barrier, he asserted that its abrogation brought a new dawn of hope to the J&K people. RSS general secretary Dattatreya Hosabale also addressed the gathering at Gulshan Ground near Jammu University.

Later, the Defence Minister chaired a meeting of the UT BJP leaders and exhorted them to get ready for the Assembly elections, party sources said. During the meeting, a host of issues were discussed, including the political situation in the UT ahead of the upcoming Assembly polls. The security situation and the organisational issues being faced by the BJP were also discussed. Earlier, Singh was received at the J&K BJP headquarters here by its president Ravinder Raina, a party spokesman said. This is Singh’s second visit to Jammu in a little over a month. He visited the region on June 17 on the occasion of the 200th year of coronation of Maharaja Gulab Singh. — PTI

At a programme to remember the Kargil martyrs, Rajnath Singh said joint theatre commands of the tri-services would be set up to enhance coordination among the armed forces. Later, chairing a meeting of J&K BJP leaders, he asked them to get ready for the Assembly elections in the UT, party sources said. Political and security situations were discussed at the meeting.