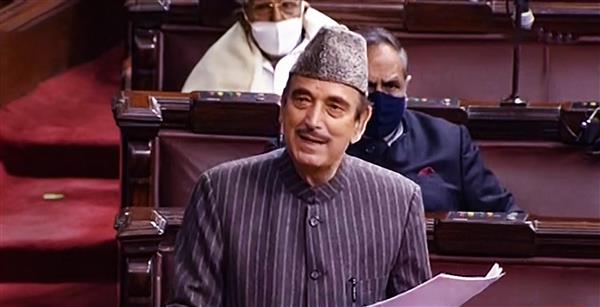 Raising concerns over the prevailing situation in Jammu and Kashmir following the abrogation of special provisions under Article 370 and Article 35A, Leader of Opposition in Rajya Sabha Ghulam Nabi Azad on Wednesday said local people across the three regions - Kashmir, Jammu and Ladakh – are not happy and demanded that statehood to J&K should be restored and assembly elections held at the earliest.

He was speaking in Rajya Sabha while taking part in the debate over Motion of Thanks to the President’s speech to the joint sitting of both the Houses of Parliament.

“I never heard Atal Bihari Vajpayee or any BJP leader whoever demanded that Jammu & Kashmir should be split into two. There was a demand for UT in only one district of Ladakh (Leh), not Kargil,” Azad said, adding: “Even though I would have been happy if Ladakh would have been made a UT and J&K would have left as it was”.

The Congress leader, however, congratulated the government on conducting successul elections to the District Development Council (DDC) elections in J&K.

Azad claimed that on other parameters the both the UTs have fallen below their earlier positions.

“Tourists don’t visit the place much now, and the ones that do frequent only the luxury hotels, and rarely interact with locals. How can local people benefit from this,” Azad said.

“As for education, the internet connection is often cut off, and even when available, it is 2G. In the age of 4G connectivity, how can we do anything with 2G? This is affecting the education of students, especially during this pandemic,” Azad said.

“Indira Gandhi taught us that we can’t fight on so many fronts. People in Ladakh, Jammu are not happy that anyone can buy their land or get jobs. No one is happy in J&K and Ladakh,” he told Prime Minister Narendra Modi, who was present in the House.

“We have to take our people in confidence and give them love,” he said asking the Prime Minister to restore statehood to J&K.