The Congress leader exhorted the gathering to chant ‘Jai Mata Di’, a day after he paid obeisance at the Mata Vaishno Devi shrine in Katra 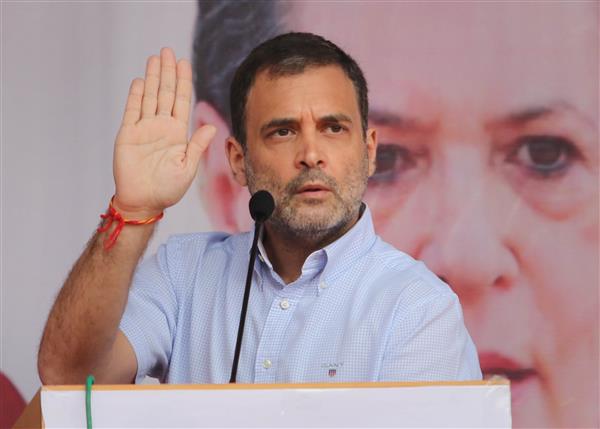 Congress leader Rahul Gandhi during an office-bearers sammelan in Jammu on Friday. PTI

Congress leader Rahul Gandhi on Friday accused the RSS-BJP combine of trying to break the composite culture of Jammu and Kashmir.

“The feeling of love, brotherhood and composite culture exists among you all. I feel sad that the RSS and BJP are trying to break this culture,” Gandhi said in his address to Congress office-bearers and workers at a party function here on the second day of his two-day visit to Jammu.

“They (RSS, BJP) attack love and brotherhood… You got weakened and as result, they took away your statehood,” he added.

The Rashtriya Swayamsevak Sangh (RSS) is the ideological fountainhead of the Bharatiya Janata Party (BJP)-led government at the Centre.

The Congress leader exhorted the gathering to chant ‘Jai Mata Di’, a day after he paid obeisance at the Mata Vaishno Devi shrine in Katra.

Goddess Durga protects us, Lakshmi is a symbol of power, and Saraswati symbolises education and knowledge, he said.

However, the BJP government’s policies like demonetisation and GST have weakened their powers, he said.

Whereas, the Mahatma Gandhi National Rural Employment Guarantee Act (MGNREGA) and the GDP with a growth rate of 9 per cent under the Congress had increased their powers, he added.

Pointing towards his hand, Gandhi co-related the Congress election symbol with Lord Shiva and Guru Nanak Dev, and said it was the symbol of being fearless.

“This hand is the symbol that you should not be afraid of anything,” Gandhi said, adding that the “BJP is afraid of everything”. —PTI