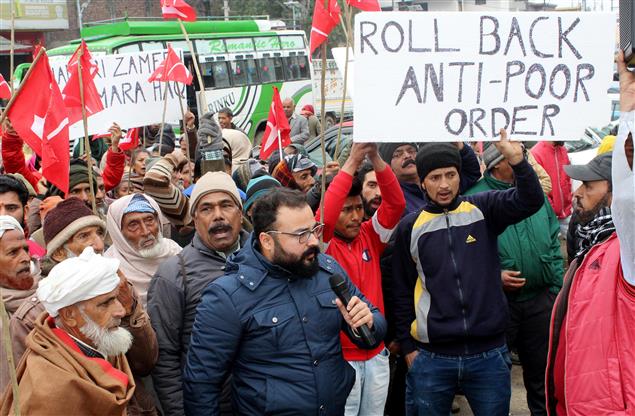 Supporters of the National Conference protest against anti-encroachment drive, in Udhampur. ANI

The Supreme Court on Friday refused to stay a circular issued by the administration of Jammu and Kashmir for removal of encroachments on state land, including that given under Roshni Act, by the end of this month even as it said houses should not be demolished.

“We are not passing any orders today. You instruct them orally not to demolish any houses. But we will not grant a general stay.... others (encroachers) should not get benefit,” a Bench led by Justice MR Shah told the advocate representing the Jammu & Kashmir administration.

“If stay is granted then it will benefit land grabbers,” said the Bench which also included Justice CT Ravikumar.

As the petitioner’s counsel said several tribal families were residing on the land in question, the counsel for the Jammu and Kashmir administration questioned their locus standi and submitted that the circular mainly focused on the Roshni land. The land had only shops and such establishments, he added.

The J&K administration had earlier directed the removal of all illegal encroachments on its land, including Roshni land and Kachharie land, by the end of this month.

The J&K High Court had in 2020 declared the Jammu and Kashmir State Land (Vesting of Ownership to the Occupants) Act 2001 (Roshni Act) unconstitutional.

Several protests have been organised across J&K against the eviction order.