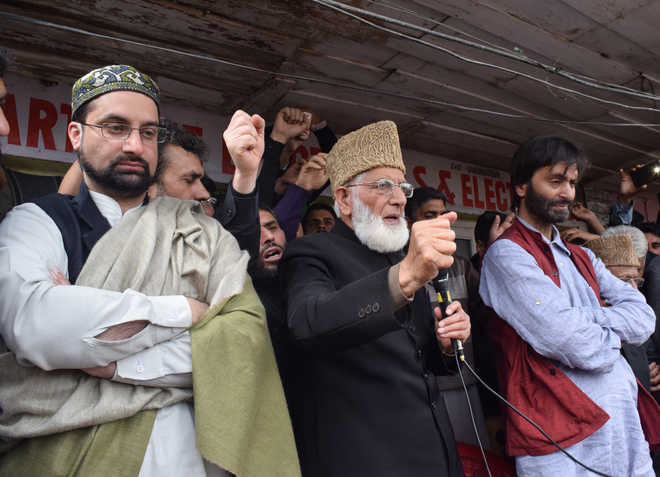 Syed Ali Shah Geelani’s resignation from the Hurriyat Conference faction that he led for the past 17 years is a turning point in Kashmir’s separatist politics orchestrated by Pakistan for the past 34 years, beginning with the Muslim United Front in 1986. File photo

Syed Ali Shah Geelani’s resignation from the Hurriyat Conference faction that he led for the past 17 years is a turning point in Kashmir’s separatist politics orchestrated by Pakistan for the past 34 years, beginning with the Muslim United Front in 1986.

Cultivated by Pakistan, Geelani ultimately fell to Pakistan’s machinations of rebuilding a parallel structure to the Hurriyat Conference in Pakistan-occupied Kashmir, flattening his ambitions of presiding over his own creations and passing on the baton to persons of his choice.

Pakistan did not approve of Geelani’s aspirations to raise structures of his choice and acquire a larger-than-life image. This obstruction apparently made the separatist leader resign from the group that he founded in September 2003 after he had parted ways from the original APHC (All Parties Hurriyat Conference) founded in March 1993. Mirwaiz Umar Farooq was the first chairman of the conglomerate.

After having announced his resignation on the social media, he sent a two-page letter to the APHC, saying that he had tried to reach out to the Hurriyat leaders to rise to the occasion after August 5 last year, the watershed date in the history of Kashmir when Article 370 was scrapped, but he received no response.

Geelani’s letter is full of charges against the Hurriyat leaders in the PoK. Demanding accountability, he has accused them of financial irregularities.

Now, the question on most minds is: who next after Geelani? Ashraf Sehrai who had become chairman of the Tehreek-e-Hurriyat, the main constituent of the APHC (G), and whose son Junaid Sehrai was killed in an encounter with security forces, is seen as a natural successor to Geelani by some Kashmir observers. Rest, all depends on Pakistan.