Terrorism alive in J-K, can be ended only by holding dialogue with Pakistan: Farooq Abdullah : The Tribune India

Terrorism alive in J-K, can be ended only by holding dialogue with Pakistan: Farooq Abdullah 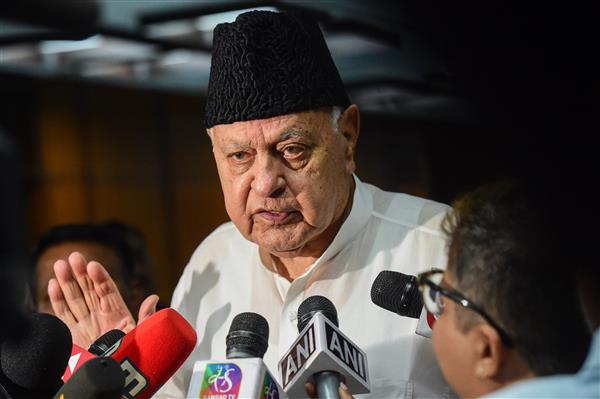 Terrorism is alive in Jammu and Kashmir and can be ended only by holding dialogue with Pakistan, National Conference president Farooq Abdullah has said, lashing out at the BJP for "spreading hatred" which is a danger to the integrity of the country.

He said the Kashmiri Pandits need a balm on their wounds which is possible when love replaces hatred.

"I am going to give you in writing with my blood that terrorism is alive and it will not end till you start talking to Pakistan. When you can talk to China which has entered our borders and land 16 times, why are you shying away from talks with Pakistan," Abdullah, a former chief minister, told reporters here on Thursday.

He reached Kathua from Jammu by bus and participated in the Rahul Gandhi-led Bharat Jodo Yatra which entered this entry point via Pathankot in Punjab on Thursday evening to start the last leg of his foot march from Kanyakumari to Kashmir.

Asked whether talking to Pakistan would end terrorism in Jammu and Kashmir, he said, "We have to make an attempt but they (the BJP government) are reluctant. They have to spread hatred to pitch Muslims and Hindus against each other for their vote bank."

"They are spreading hatred without caring for the safety of Hindus who are living in Pakistan and the Muslims of our country," he said, adding, "If hatred is not removed from the hearts of the people, there is a threat to the integrity of India."

Abdullah said both Kashmiri Pandits and Muslims suffered and even his workers and ministers were killed in large numbers since terrorism began in Kashmir Valley.