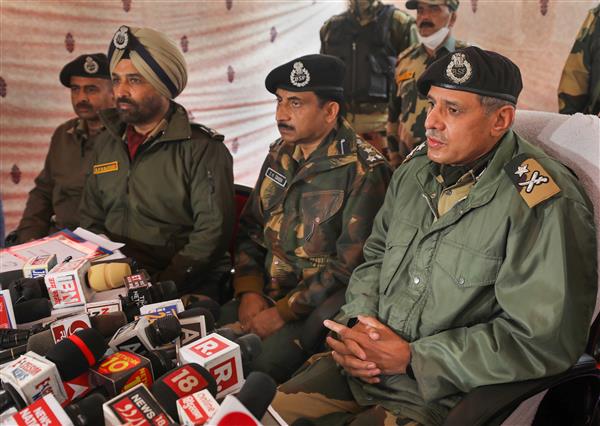 The Border Security Force (BSF) today said its personnel had gunned down three Pakistani intruders and scuttled a major narcotic smuggling attempt, seizing 36-kg heroin along the international border in Samba sector. With this, the troopers have foiled the fourth narcotic smuggling bid along the border this year. In the past one year, nine Pakistani intruders have been eliminated, the BSF said in an official statement, quoting Jammu Frontier’s Inspector General DK Boora.

“The smugglers tried to take advantage of the darkness and foggy conditions to smuggle the huge quantity of narcotic into this side,” Boora, who rushed to the Bainglar border outpost where his troops made the biggest recovery this year, was quoted as saying.

Displaying the seized items, the IG said the surveillance equipment picked up the movement of the smugglers and accordingly the troops on the forward duty points were alerted.

“Near the border fence, they were challenged by the troops and subsequently all three were neutralised. The search of the area led to the recovery of 36 packets, comprising around 1 kg narcotic each. A pistol, a magazine along with nine rounds were seized from one of the slain intruders,” the BSF officer said.

We have been getting specific inputs about the possible attempts of narcotic smuggling over the past 10 days. The BSF personnel remain on high alert and never lower their guard. —DK Boora, BSF’s jammu frontier

In addition, Rs 9,820 in Pakistani currency, a knife and a Pakistan-made cough syrup were also seized, he added.

Boora said every such attempt from Pakistan had been foiled by the border guards.

“It is a big achievement for the BSF…We have been getting specific inputs about the possible attempts of narcotic smuggling over the past 10 days,” he said, adding the BSF remains on high alert and never lowers its guard.

In one year, 79-kg heroin has been seized by Jammu Frontier men besides apprehending 4 intruders and killing nine. Earlier, BSF DIG SPS Sandhu said the attempt was foiled around 2.30 am. This is worth over Rs 180 crore in the international market, an official said.

Alia Bhatt clears 'myth' about marriage on 'Koffee With Karan', says 'no such thing as suhagraat, you are …’