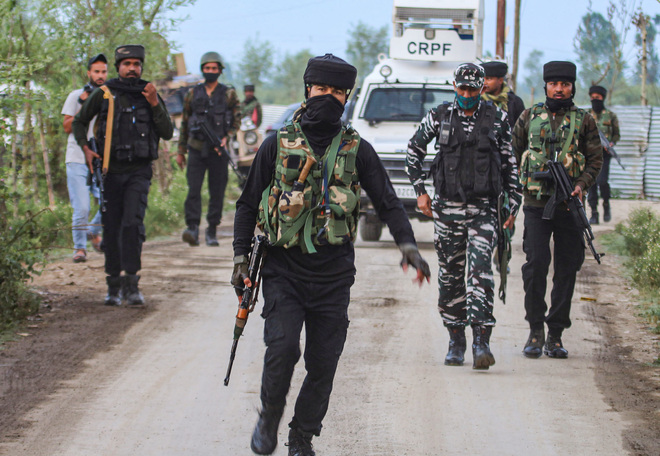 Security men during the encounter at Sopore in Baramulla. PTI

In a joint operation, security forces eliminated at least three Lashkar-e-Toiba (LeT) terrorists, including the terror outfit’s top commander, Mudasir Pandit, one of the most wanted militants, in Sopore area of Baramulla district late on Sunday night.

Senior officials in the security establishment, confirming about the encounter, said, the militants were killed in Gund Brath area of Sopore in the north Kashmir district.

The encounter had started late on Sunday night as the security forces launched a cordon-and-search operation in the area following information about the presence of at least three militants, including Pandit, they said.

The killing of Pandit, who was wanted by security forces in many cases, including the killing of two BJP councillors and a policeman on March 29 this year, was a major relief for the local population, said the Kashmir IGP.

Another terrorist has been identified as a Pakistan national. “Foreign #terrorist identified as Asrar @ Abdullah a resident of #Pakistan was active since 2018 in North Kashmir,” Kumar tweeted.