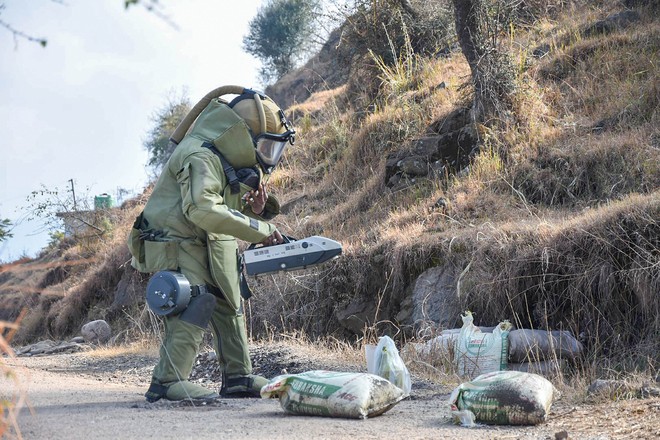 A bomb disposal squad member destroys a 2.4kg IED along the Gohlad Mendhar road near the LoC in Poonch district on Sunday. PTI

A tragedy was averted with the timely detection of a 2.4 kg improvised explosive device (IED) fitted on a motorcycle in the Mendhar sector of Poonch district, a police officer said on Sunday.

The IED was found planted along Gohlad Reelan-Mendhar Road by a police party on Saturday and was destroyed in a controlled explosion by the bomb disposal squad on Sunday, Poonch SSP Ramesh Angral said.

Quoting preliminary investigation, the officer said the IED along with the motorcycle was left behind by a suspected terrorist who had likely fled towads the nearby forest area.

A joint search operation by the police and the Army is underway after the area was cordoned off to nab him, the SSP said. PTI