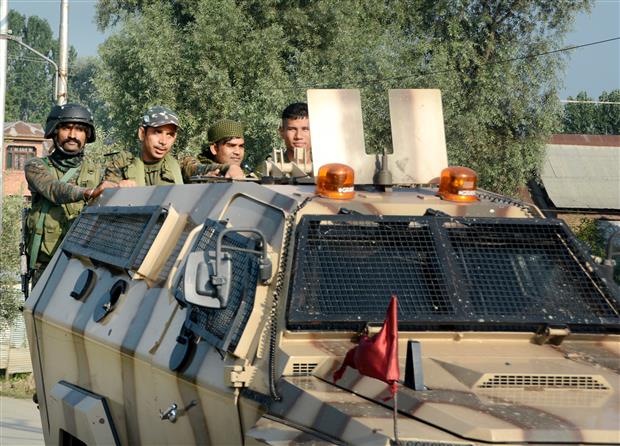 Security personnel near the encounter site in Srinagar. PTI

With security forces neutralising two local Lashkar-e-Toiba (LeT) terrorists on the outskirts of Srinagar in an encounter today, Vijay Kumar, IGP, Kashmir zone, has said 78 terrorists have been killed in the Valley so far this year.

Officials in the security establishment in J&K said the two slain LeT militants were involved in all the three terror incidents that took place in Srinagar in June this year and the forces and intelligence personnel had been tracking their movement.

“When it was confirmed yesterday that they were hiding at the encounter site, the CRPF launched a cordon operation. We appealed to them to surrender but they refused after which an encounter started and both were killed,” said a senior security official.

The Kashmir IGP later said that a total of 78 terrorists had been neutralised in the Valley so far this year.

Out the 78 militants, 39 belonged to the proscribed terror outfit LeT and the rest were affiliated to Hizb-ul-Mujahideen (HM), Al-Badr, Jaish-e-Mohammed (JeM) and Ansar Gazwat-ul-Hind.

Earlier in the day, the Kashmir Zone police in a tweet had said two unidentified terrorists were killed in an encounter with security forces at Alamdar Colony, Danmar area in Srinagar.