Arvind Kumar, a resident of Bihar, killed in Srinagar, while Sagir Ahmad from UP breathed his last in hospital after being fired at in Pulwama 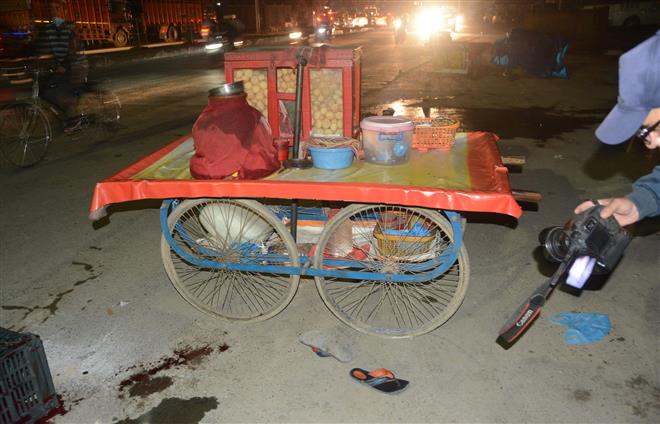 Slippers at the spot where militants shot dead a non-local Arbind Kumar, at Eidgah in Srinagar, on Saturday, October 16, 2021. PTI

Terrorists on Saturday killed two non-locals – one from Bihar and another from Uttar Pradesh – in Srinagar and Pulwama districts of Jammu and Kashmir, Jammu & Kashmir Police confirmed.

According to the Police, Arvind Kumar Sah (30), a resident of Banka in Bihar, was shot at by the militants outside a park at Eidgah in Srinagar in the evening. Arvind died on the spot, they added.

In another incident in Pulwama, militants fired at and critically injured Saghir Ahmad, a carpenter hailing from Saharanpur in Uttar Pradesh, who succumbed to his injuries at the hospital, the Police said.

Kashmir Zone Police in a Tweet said, “#Terrorists fired upon 2 #NonLocal labourers in #Srinagar & #Pulwama. Shri Arvind Kumar Shah of Banka Bihar #succumbed to injuries in Srinagar and Shri Sagir Ahmad of UP #critically injured in Pulwama. Areas have been cordoned & searches started.”

In another tweet the Police said, “NonLocal labourer Shri Sagir Ahmad of Saharanpur, UP who was #critically injured in a #terror attack in Pulwama, also #succumbed to his injuries.”

These targeted killings took place on a day when police claimed that they have eliminated three militants in a span of 24 hours, who were involved in last week’s killings of members of minority communities.

The BJP has condemned Saturday’s killings. Party spokesman Altaf Thakur said the killing of two non-locals is highly condemnable and shocking. He urged the police to nab the killers and punish them sternly.

Former J&K chief minister and national Conference leader Omar Abdullah also condemned the killings. In tweet he said, “Strongly condemn the killing of street vendor Arvind Kumar in a terror attack in Srinagar today. This is yet another case of a civilian being targeted like this. All Arvind Kumar did was come to Srinagar in search of earning opportunities & it’s reprehensible that he was murdered.”

People’s Conference chairman Sajad Gani Lone termed the attacks as cowardly. “This is pure terror. Yet again a non-local vendor was shot and killed in Idgah. What a shame. How cowardly can it get,” he tweeted.

Strongly condemning the killings of two innocents, former J&K Chief Minister and PDP president Mehbooba Mufti in a tweet said, “Such unfortunate incidents only reinforce the immediate need to reach out to the people of J&K by initiating a constructive dialogue.”

In another tweet Mufti said, “An innocent civilian on his way home to his wife & kids, a non local street vendor eking out a living or troops in Poonch. None of these people deserved to die. One wonders what will it take for GOI to realise that its policies have been a monumental failure in J&K & at what cost?”