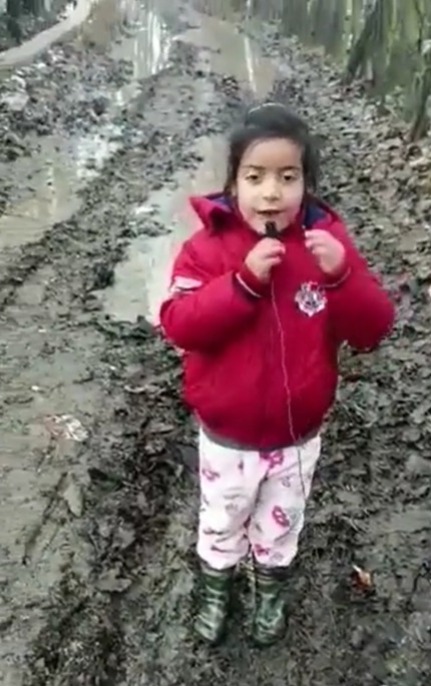 An undated video of a little girl from Kashmir who turned reporter to show the bad condition of lanes and bylanes has created a storm on the internet, with netizens complimenting her for her coverage.

Dressed in a pink jacket, the girl, whose name as well as the place where she was shooting the video could not be immediately confirmed, is complaining that guests cannot come to her place because of the bad road condition.

“Itni gandi road hai ki mehman bhi nahi aa sakte (the road is so bad that guests also cannot come),” the girl said while directing her camera person, whom she refers to as “mom”, to show the potholes.

Narrating how mud and rains have made the condition worse, the girl walked on a road showing the potholes in a 2.08 minute video apparently shot on a mobile phone.

The girl showed how people were also dumping garbage on roads and shouted “sab gandha ho gaya hai (the neighbourhood has become dirty)”.

The video has been shared by many Twitter users and has been viewed over one lakh times.

This is not the first time that a child from the valley has appealed to authorities through video messages.

Last year, a 71-second video addressed to Prime Minister Narendra Modi by six-year-old Mahiru Irfan, seeking a cap on duration of online classes, had propelled the girl from Kashmir to overnight media stardom as camera crews made a beeline at her residence for a soundbyte.

The video had caught the attention of Jammu and Kashmir Lieutenant Governor Manoj Sinha, who directed the School Education Department to come out with a policy in 48 hours to ease the burden of homework on the school students. — PTI

"Take a look, because of rain and snow the road is so dirty that no guest will take the road to come to us..."

This 6-year-old cutie is from #Kashmir. Would love to see her as a reporter working for a national or international TV channel, 15 years later.